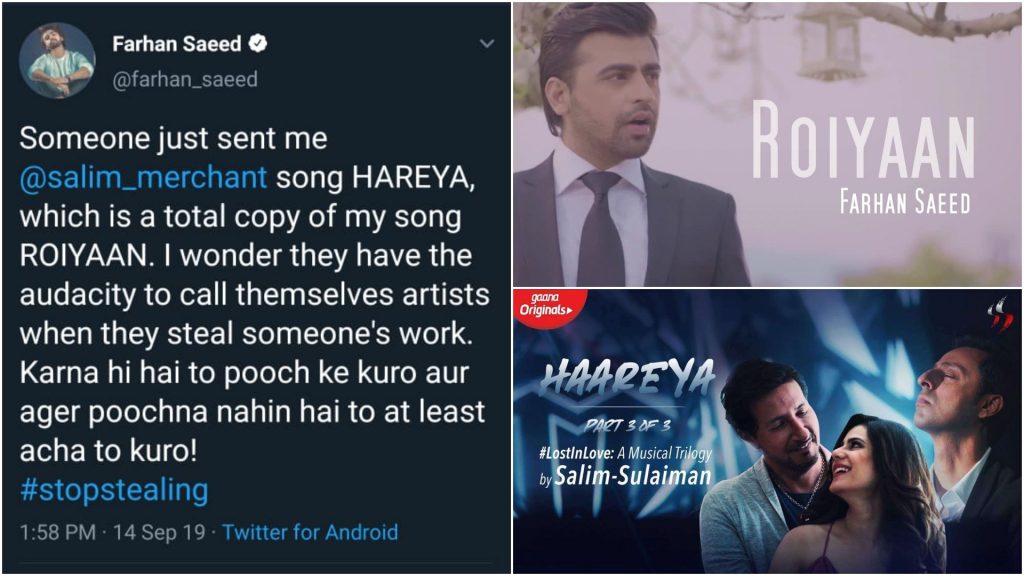 Farhan Saeed who is celebrating his birthday today was sent a clip of a song which has an uncanny resemblance to that of his song Roiyaan that he released back in 2014:

Someone just sent me @salim_merchant song HAREYA, which is a total copy of my song ROIYAAN. I wonder they have the audacity to call themselves artists when they steal someone's work. Karna hi hai to pooch ke kuro aur ager poochna nahin hai to at least acha to kuro!#stopstealing

Farhan Saeed also continued to say how people who call themselves artists have the audacity to blatantly copy songs and release them under different name, in this case from Roiyaan to Haareya:

He ended his tweet with the hashtag #StopStealing. The singer Salim Merchant replied to Farhan calling it a mere coincidence:

Farhan I just heard your song. It’s a mere coincidence that the chorus of Haareya is like your song. To be honest I’ve never heard it before. It happens many a times when notes have a natural progression from each other. @Sulaiman & I have a track record of never plagiarising.

Salim Merchant also stressed that he’s never plagiarized anyone’s work and has a clean track record with Sulaiman Merchant. Farhan also believed it could have been because of fact that they shared the same lyricist Kumaar:

@salim_merchant if you say so! Another co incidence is we have the same lyricist! Anyway good luck !

Salim Merchant then suggested that Farhan checks in with their lyrcist Kumaar, and also assured him that had he heard Farhan’s song first he would have gladly made changes in his composition and ended the tweet hoping that Farhan would understand:

Why don’t you check with him!
If i had to copy, I would have done that way long back in my career. I really wish I had heard your song before I made mine. Would have surely made changes to our composition to make it sound different from yours. Anyway, Hope you understand..

Fans stood strong with Farhan and agreed that it was indeed a copy of Roiyaan, that too a bad one 😂

Fans assured him how no one cam beat his original number:

Farhan your song is in my library from many years, believe me no one can sing 0.0001% batter than you. Love it #Rohiyan

No merchant can beat you at this bro. Keep excelling and let the rest follow (or copy..)!

Many called the Indians ‘fail artists’ who thrive on stolen work:

People were shocked at the revelation:

Some suggested that Farhan sues the duo:

You should definitely sue them. The song is my personal favorite and he ruined it. Why do Indians have to copy our music

Some dug up an old tweet from Salim Merchant, which in this case is simply ironic:

I may be a bit late in expressing myself about the remakes of old songs that almost every film has these days.
Are they really working ? Haven’t we had enough already ? There is so much talent out there. Why not make original songs please!

People were feeling bad for him to have to go through this on his birthday:

imagine waking up to this on your birthday!! the world is full of losers!! yeh dunia jhooti log luterey

People were pointing out how India had lost it’s originality long time back:

People were lashing out on Bollywood for being the dheet nasals they are:

What else you expect from an Indian? They are born to steal and copy. Majority of bollywood movies are total copy of Hollywood movies.

Fans of the Indian singer too were sad to find out about the plagiarism:

And while both Farhan and Salim have somewhat addressed the situation, there has been no word from their lyricist Kumaar.

What do you think about the similarities between the 2 songs? Let us know in the comments below!

Diva Jukebox: Pakistani Film OSTs Which Won Us Over!

Look put together in 5 minutes with 5 affordable products!