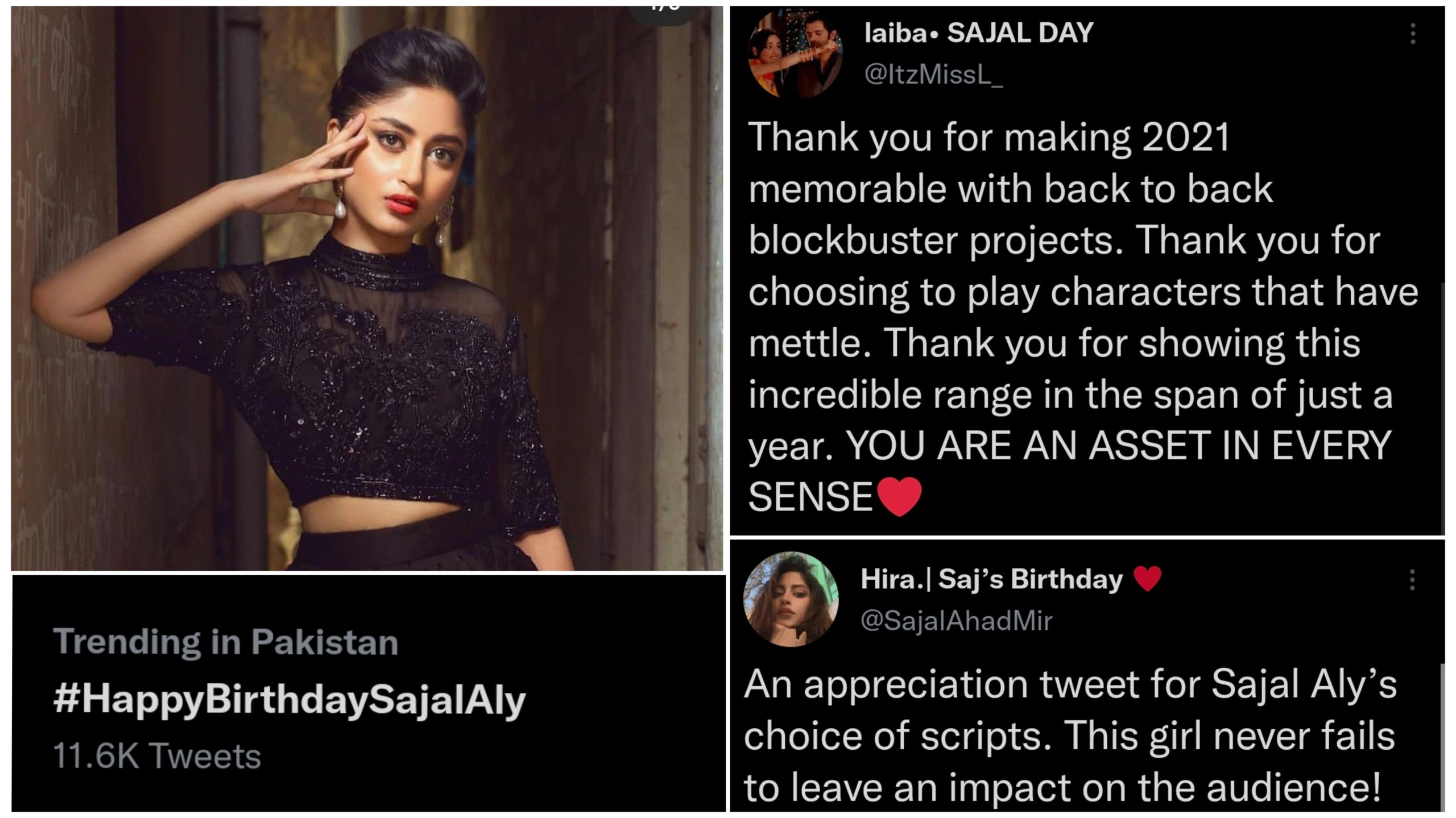 It’s a rather happy day on Twitter as Sajal Aly’s fans celebrate her birthday online sending her love, praise and lots of prayers.

Celebrating one of the biggest stars in the country, #HappyBirthdaySajal dominated the twitter trends

And here’s what fans have to say:

behind every successful woman is herself #HappyBirthdaySajalAly
SAJAL ALY pic.twitter.com/pk9kSm1361

People were sharing their favourite performances:

happy birthday to the girl who has given me happiness when i was at my lowest,inspired me and unknowingly motivated me. someone i fell in love the first time i saw her bcuz there was smthn so pure about her.<33 #HappyBirthdaySajalAly pic.twitter.com/vQXK0WSAh5

I want to begin by saying that Saj you’re such an inspiration for so many! I admire your dedication to your work. Your work really does speak for itself. You’ve accomplished so much at such a young age and we as fans couldn’t have been any more prouder #HappyBirthdaySajalAly pic.twitter.com/NescCFow49

From Chammi to Zubiya,Sassi to Momima,Aina to Sara Rabia to Shanaya she has never fails to impress us with her range and amazing performance.@Iamsajalali you’re brilliant in whatever role you play!We love you <3

Happy Birthday Sajal 🤍
You are not just a celebrity, you feel home to me. Thankyou for existing, sending u all the love & prayers May u keep bringing smiles to millions of us. I love you so so so much🥺@Iamsajalali #HappyBirthdaySajalAly pic.twitter.com/ONuILizpZZ

Fans from across the border were also celebrating:

The most alluring thing a woman can have is confidence

Thank you for making 2021 memorable with back to back blockbuster projects. Thank you for choosing to play characters that have mettle. Thank you for showing this incredible range in the span of just a year. YOU ARE AN ASSET IN EVERY SENSE❤#HappyBirthdaySajalAly
SAJAL ALY pic.twitter.com/pmcVrQyxLA

Sky is the limit!

Sajal Aly. The Sajal Aly. Cant go on and about of how talented she is as an actress. 11yrs in this industry & countless projects. From supporting to lead actor to starring in an international film. we're so proud of you,sajal. shine on, my love<3
#HappyBirthdaySajalAly pic.twitter.com/Y55Q6gAj7c

From being rejected for lead roles to winning International Awards Sajal has worked soo hard for more than a decade to achieve this place. Her wholesome journey always gets me teary eyed🔥#HappyBirthdaySajalAly pic.twitter.com/HzQoE0SdDT

Fans were super proud of her:

Can we all just say that 2021 was Sajal Aly's year. With mega projects being announced and hitting the screens all throughout the year, Sajal has really worked so hard!!!
So proud of her!!!

#HappyBirthdaySajalAly
Happy Birthday to this girl right here who has become a part of our lives through her characters. Your work, ethics and you as a person, basically everything about you is golden. Have a great day 🌟✨💙 pic.twitter.com/YZiD8Vaes3

These performances will remain superior forever, her dialogue delivery, her acting, her expressions, everything was top notch!!!

happy birthday to my star on earth sajal aly thank you for being my source of happiness for so many years i will always love you #HappyBirthdaySajalAly @iamsajalali pic.twitter.com/3S9Q1tEbRz

Happy Birthday to the most versatile actor of this age, who's given so much to this industry, girl you really deserve the world!! Wishing you a great year ahead with so many huge projects coming your way. Happy Birthday Queen!!!@Iamsajalali

That’s Sajal Aly for you!

An appreciation tweet for Sajal Aly’s choice of scripts. This girl never fails to leave an impact on the audience! @Iamsajalali

What are some of your favourite performances of Sajal? Share the love below!

Coke Studio's Tu Jhoom Gets A Big Nod Of Approval From Fans & Celebrities!