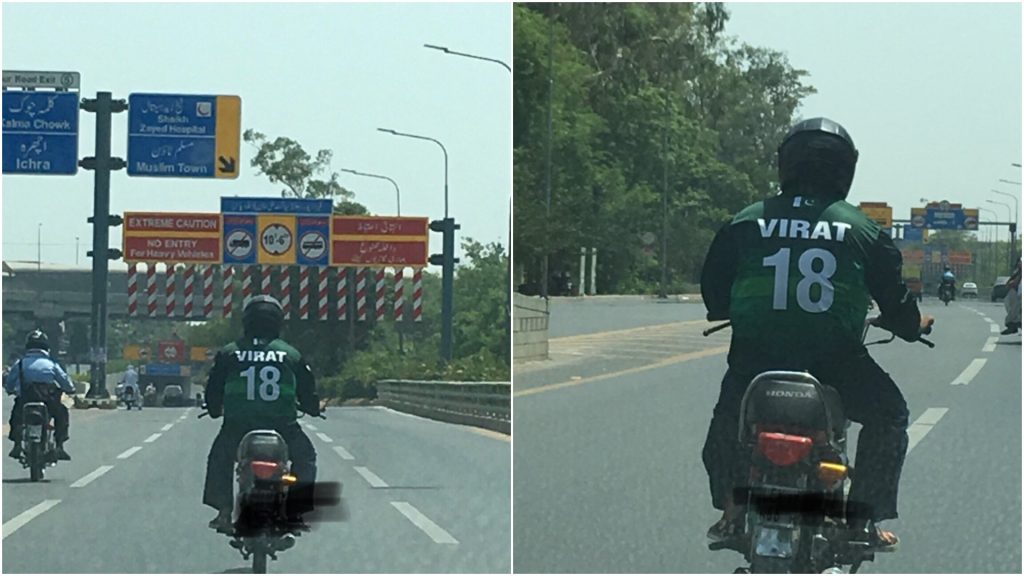 Cricket means so much more than just a game in India and Pakistan, we bleed cricket, we breathe cricket! And both the countries have given us phenomenal players over the years that have a great fan following on both sides of the border.

Recently, a man wearing a Pakistani jersey with Virat (Kohli) written on it went viral on Twitter!

THE BEST PHOTO OF #CWC19: Virat somewhere in #Lahore pic.twitter.com/gXy3lDN8PH

As soon as the picture went viral, comments started rolling in from both sides of the border. And surprisingly the comments were full of love and support rather than hate:

True champion will always be appreciated all around the world..👏 👏 Going to fast also. Probably end up in oval 😁 😁

All for constructive criticism:

There used to be many Indians who were fan's of Pakistan bowlers like Shoaib Akhtar, Wasim Akram etc but lately Pakistan cricket hasn't been able to produce such cricketer's.

He does, rightly so!

He has so many fans in Pakistan

@imVkohli this is love for u from Pakistan. Doesn't matter u are from india or some other part of the world, we love cricket

We keep are grounds separate, I think this can only be happened in Pakistan as we are more tolerant society than indians, while in india minorities are being killed or victimised unnecessarily.. @adeel_azhar @Khalistan2020 @Khalistanpost

Just Imagine Indian citizen wearing any Pakistani player's Jersey. Would have lynched to death or sent to Pakistan through Wagha Border.

And Indians themselves drew a picture of what could have happened had the incident taken place in India:

1. In India, a man wearing a Pak jersey would get lynched on the street

2. news channels would say, ‘sad, but dint he deserve it? Why was he cheering for our enemy?’

3. right wing will say, ‘Jai Hind, he deserved it’

4. left wing will say, ‘he almost deserved it’

It is very common to wear blue shirt in Pakistan. It is not india where Afridi fan was locked. In Pakistan majority wear Dhoni jersey no 7

Haha and a Pakistani flag. If only we could all live such simple lives

Cricket has no religion

A fan is a fan is a fan.
Till today Akram, Waqar remain fast bowling gurus in India.
I still remember innings of 72 by Salim Mallik in 1980's….He won it for Pakistan from brink of defeat single handedly..

Wah! This pic needs to be shared more. I was a fan of Inzibhai & Wasimbhai during their playing days. What a team you guys had!

So many fans from India!

Wasim Akram has been my favourite bowler for all time. Sports heroes transcend boundaries for sure.

Legends for a reason!

People even wished well to Imran Khan as a PM:

So was @ImranKhanPTI the cricketer . Wish his politics was like that of a true sportsman

These are the tweets that we live for!

There have been legends in Pak team-Wasim Akhtar, waqar Younis, Shoib akhtar, Aqib Javed, Inzi, Youhana, Afridi etc. Putting all the politics aside, people who are true cricket lover have praised these players for their amzing game.

Many cricket fans in India just like me are huge fans of lots of pak legends like shoaib akhtar, younis khan, yousuf, misbah, waqar, wasim.. In this team malik, wahab and Amir.. Illogical fans will be there on both side..

Even Pakistanis expressed their love for Indian players:

Virat is the greatest especially his fighting spirit. Wish we had someone like him in Pakistan

There is many lover of Indian players… I miss @sachin_rt too

Virat Kohli is a great cricketer. Sports should be above out political differences. I have always been a fan of Gavaskar, Kapil Dev, Srikkanth, Dravid, Yuvraj etc. Cricket is a sport.

There was love for Amir and Wahab too!

A spell that’ll be remembered for decades!

From an Indian fanboy — Don't remember a more passionate spell in recent times than the one from Wahab to Watson. As a fellow desi, felt really good and proud to see him giving a fitting response to an arrogant Aussie!

Love has no boundaries!

I am biggest fan of @imVkohli & @msd7official
Love from Pakistan

Will he be termed as Anti -National??

yea its not something strange for us pakistanis coz
1. v hv sportsman spirit
2. v r not fanatics

One of the tweeps expressed how partition should never have taken place:

Partition was wrong in every way.
Few men sitting in a room decided the fate of millions. It resulted in the biggest genocide of mankind. The blood of those innocent lives is on hands of those so called policy makers. But now the divide is too much to fill.

A lot more than you think!

How popular are @msdhoni and @imVkohli in Pakistan?

Only yesterday Virat Kohli won over a lot of fans globally after he asked the Indian crowd to applaud Steve Smith instead of giving him a hard time by calling him a cheater. The gesture was loved by thousands of people around the world, who are Virat fans now, including us!

With India fans giving Steve Smith a tough time fielding in the deep, @imVkohli suggested they applaud the Australian instead.

Virat Kohli on why he asked crowd to stop chanting at Steve Smith.

“He didn’t do anything to be booed. With so many Indians in the crowd I didn’t want them to set a bad example. I asked sorry to him on behalf of the crowd"

Virat Kohli is not only a great cricketer he is also a great human. Respect for King Kohli. 👏 https://t.co/xWd9wWJ1w4

Like someone said, cricket has no religion and art has no boundaries, we stan the love both countries share for these amazing cricketers! What cricketer is your favorite? Let us know in the comments below!

Movie Magic: 6 Pakistani films you should be on a lookout for this year!

The hashtag Beautiful Pakistan is a glimpse into Heaven!