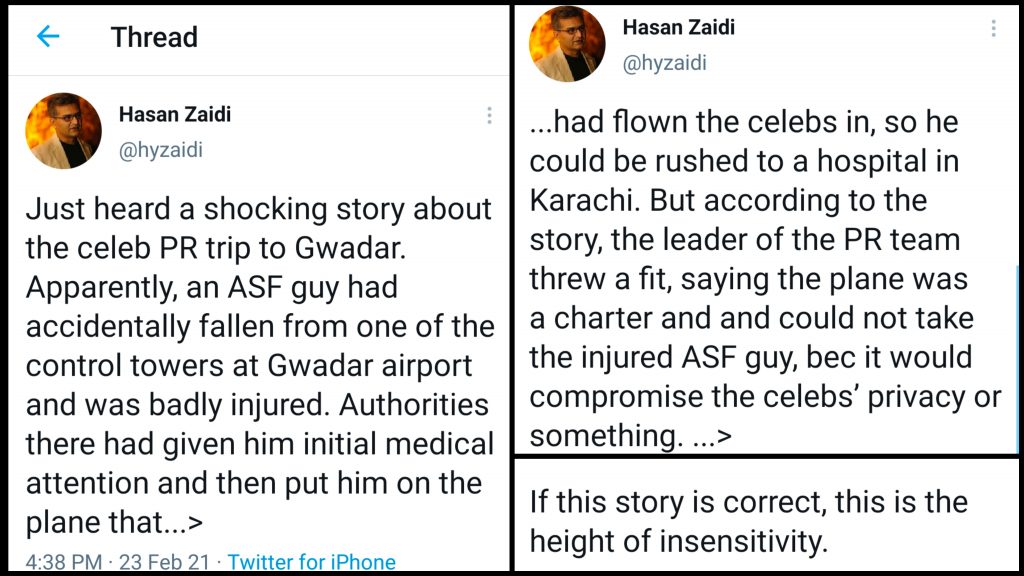 Newly inaugurated Gwadar stadium recently hosted its first friendly match between Showbiz Sharks and Gwadar Dolphins that was spectated by several celebrities besides those who were part of the teams including Fakhr e Alam, Ali Zafar, Faysal Qureshi among others.

Just heard a shocking story about the celeb PR trip to Gwadar. Apparently, an ASF guy had accidentally fallen from one of the control towers at Gwadar airport and was badly injured. Authorities there had given him initial medical attention and then put him on the plane that…>

…had flown the celebs in, so he could be rushed to a hospital in Karachi. But according to the story, the leader of the PR team threw a fit, saying the plane was a charter and and could not take the injured ASF guy, bec it would compromise the celebs’ privacy or something. …>

…None of the ‘celebs’ stepped in to argue otherwise. After this the poor guy was offloaded from the plane, with difficulty. And the authorities then had a police mobile take him 14 hours via road to Karachi.

If this story is correct, this is the height of insensitivity.

And people are demanding answers:

Pakistani celebs for you https://t.co/iw3skmBtZ5

People were hoping that the injured official was well:

A life of a poor ASF guy put in danger to protect the privacy of celeb.
That is the class mindset.

People were tagging the celebrities to see what they had to say:

@falamb3 you need to respond to this.

Thread is directed to you @falamb3

People were in disbelief and hoped the story was not true:

Hasan, can this be fact checked? Find it hard to believe anybody would do this to an injured person. What privacy? Every minute of every day is instagrammed!!!

How shameful! Let’s hope there is a good explanation for this (though hard to see how this can be twisted)

People wanted all the celebrities involved to be named and shamed:

Name and shame all the celebs present over there. https://t.co/5TMJzEgYkV

Whoever did it must be named & shamed!!!! Full stop https://t.co/1FTgUfje6N

In no way this surprises me. I can easily expect that. https://t.co/FkKHWP67Vu

It’s hard to believe they’re worse in real life than they are at acting. (If true, if not true they’re equal in both) https://t.co/xNiPqhfdKK

People were calling them classist goons:

classist goons in this country. https://t.co/XsgPMvPIXk

If this is true, then Lanat on whoever that person was. How someone can be this insensitive is beyond me. Hoping and praying that the ASF guy gets well soon InshAllah. https://t.co/ID3C4EGOXs

People were also shocked at the lack of basic healthcare in Gwadar:

Thread about negligence, cruelty, the lack of hospitals in Gwadar and a group of entirely unrecognisable and cheesy so-called 'celebs' https://t.co/hDK6K5yZPr

2019 HRCP report on the state’s abuses in Balochistan had pointed out that the govt. hospital in #Gwadar doesn’t have qualified specialist doctors, CT scans & functioning lab equipment. No wonder the hapless ASF man needed to be driven to Karachi when celebs disallowed an airlift https://t.co/xlnwbjtyvC

Means there is no hospital in Gawadar 🤐

Think About the locals living there utter shameful govt of Balouchistan and Pakistan https://t.co/5lHZExmAg7

While the story hasn’t been confirmed or denied by any of the people involved, we hope the people in question take notice of the situation and respond.

Maria B. Unites Cultures Of Pakistan And Turkey With Her Lawn’21 Campaign!