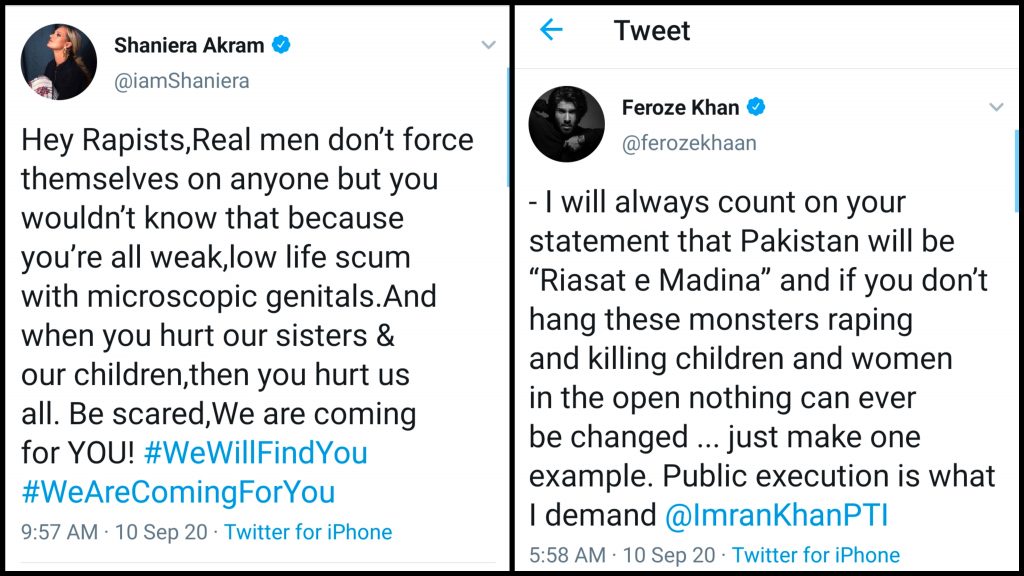 Only 2 days back we were mourning the 5 year old Marwah and yesterday another case of barbarism made the headlines after a mother of 2 was raped in front of her children at the Lahore Highway.

Sick of the heinous perprators, people are demanding public execution of rapists so that an example is made out of these culprits and the movement is also backed by celebrities.

– I will always count on your statement that Pakistan will be “Riasat e Madina” and if you don’t hang these monsters raping and killing children and women in the open nothing can ever be changed … just make one example. Public execution is what I demand @ImranKhanPTI

– a trial in such cases are useless.. it should only be execution every Friday after the Jummah prayer. That’s RIASTE E MADINA for me.

Actress Ushna Shah too wanted the culprits to be punished:

The irony that I tweeted "im okay with this" to a video of a rapist being stoned to death an hour prior to news of mother raped in front of children on motorway & 2 days after news of 5yr old Marwa shows how deep in trouble we are as a society.

Actress and model Armeena Khan shared how the news had made her feel very unsafe:

This piece of news has suddenly made every woman (including myself) feel unsafe.

Shaniera Akram tweeted that we won’t share the men who were behind it:

Hey Rapists,Real men don’t force themselves on anyone but you wouldn’t know that because you’re all weak,low life scum with microscopic genitals.And when you hurt our sisters & our children,then you hurt us all. Be scared,We are coming for YOU! #WeWillFindYou #WeAreComingForYou

Iqrar ul Hassan prayed that this barbarism comes to an end and that justice is served:

Aamir Liaquat too pledged that he will present a bill in the assembly asking for public execution of rapists:

Osman Khalid Butt wanted each and everyone involved to be investigated:

Please investigate this as well:

'She called the Motorway Police's emergency helpline 130 for assistance. However, she was told by the operator that she could not be provided help as the emergency beat had not been assigned to anyone.' https://t.co/kEAKIEFX0p

Motorway rape case, responsible personalities are those who opposed #PublicHangingOfRapists bill and they are @BBhuttoZardari @fawadchaudhry @ShireenMazari1, please answers

The horrific incident has the entire nation shaken, and they are furious!

Raped in front of her children. Neither one of them will ever be able to forget or move on from this. Lives destroyed. For their justice and for safety of the rest of us women who use motorways/highways, PUNISH THE CULPRITS. #PublicHangingOfRapists

Some suggested what punishment should be implemented:

Make this happen in pakistan I can bet on my life you wont see or hear about any rape case. Make them suffer too, they deserve a painful death. #PublicHangingOfRapists #HangRapist https://t.co/5gkc4a3fSE

“MEN” this word disgusts me to such an extent that I wish it didn’t exist. The fact that there are monsters living among us performing heinous acts and getting away with it. These are supposed to be protectors of women? Where’s justice? #PublicHangingOfRapists

I don’t think we are…

a woman? got gangraped? on motorway? in front of? her kids? ARE WE EVEN HUMANS ANYMORE ?? THIS IS SO BRUTAL , MAY ALLAH PAK DO JUSTICE WALLAH UL AZEEM BECAUSE DUNYYA DOESN’T JUSTICE, DUNYYA DOESN’T.#PublicHangingOfRapists

Yes we're not safe here, we were never, almost every girl i know has been through something like this, we're scared, we're told to be independent but we can't, ah what's this independence, she was mother of 2 and her children were with her#PublicHangingofRapists pic.twitter.com/LBp1KYxOXI

Rapists should be hang like this on the middle of streets.#PublicHangingOfRapists pic.twitter.com/bYwSrtIZ7f

People were questioning the Islamic Repuplic of Pakistan:

Is this really an Islamic state ?
Can we call ourself muslims ?

Death sentence is the only punishment for these savages.
What are we waiting for ????
Speechless#PublicHangingOfRapists#hangrapistspublicly pic.twitter.com/9n9dq21BTH

Rape cases are increasing day by day and sadly our Islamic state isn't safe for women anymore. Hang the rapists and cut their organ into pieces till their soul quite to survive. These rapists have no rights to live more. Even hell is not enough for them.#PublicHangingOfRapists

If you dont support the public hanging of rapists then im sorry, you’re as pathetic as those rapists!!!#PublicHangingOfRapists

While we can’t imagine the trauma that the woman and her children will have to bear for the rest of their lives, we do hope that the culprits are punished. Let us know what you think?

OSTs We Love To Love!