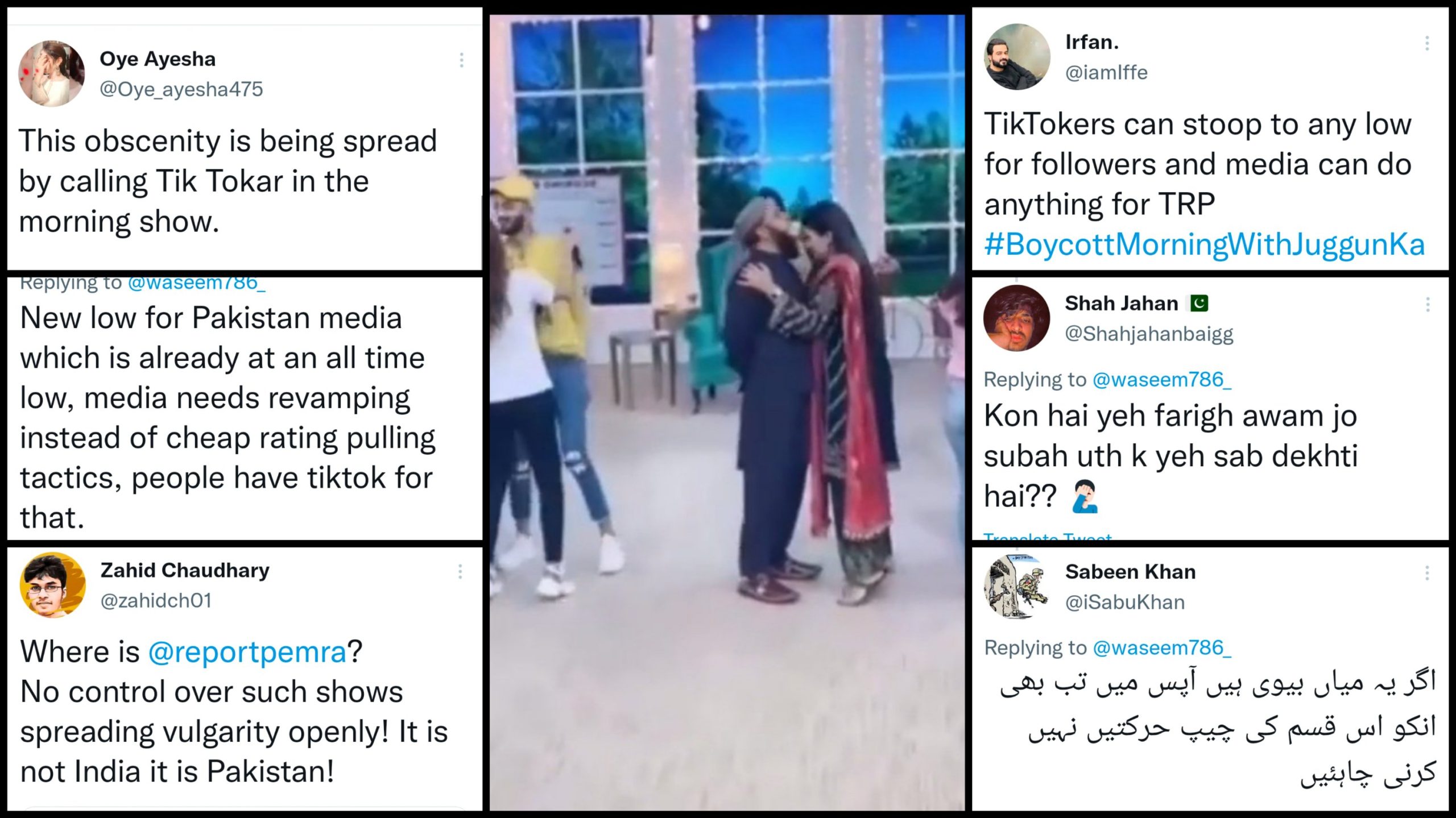 Clip from a recent episode of Morning With Juggan Kazim where she called famous tiktokers is doing rounds on social media gathering all sorts of criticism from netizens:

This obscenity is being spread by calling Tik Tokar in the morning show.#BoycottMorningWithJuggunKazim

What type of content is this??
Means, whatever husband wife do. it's their personal life no one has any right to interfare in their life.
But doing this in the family show and on the camera is also a shamefull act for both husband and wife!!!!#BoycottMorningWithJuggunKazim pic.twitter.com/LKtszVEPT0

Im juggun like every is enjoying in couple and I'm vibin alone 😭😭 https://t.co/i6arUvJ08a

For a country multiplying faster than rabbits

We sure do get our knickers in a twist at the slighest PDA https://t.co/fur5JuAXDf

People were sharing how morning shows don’t align with our values:

People were sharing the difference morning shows could make:

Everything looks good when it knows norms & values of society.What if we use morning shows to spread environmental awareness? to educate people on Health & safety?100s of problems but still these people don't care..Be sensible#BoycottMorningWithJuggunKazim

People were throwing shade on tiktok stars and the media:

TikTokers can stoop to any low for followers and media can do anything for TRP#BoycottMorningWithJuggunKazimpic.twitter.com/k78vqVLlO6

People wanted the show to be banned:

Should take immediate actions to ban these type of shows as well as impose a heavy penalty on channel. https://t.co/dI43Yqujrg

People were reminding PEMRA that this is Pakistan:

Where is @reportpemra? No control over such shows spreading vulgarity openly! It is not India it is Pakistan! https://t.co/yjpVgpWfFR

People were calling it a new low for Pakistani media:

New low for Pakistan media which is already at an all time low, media needs revamping instead of cheap rating pulling tactics, people have tiktok for that.

People were quick to judge the contestant with a beard:

Have a look at maulvi sahab in video, he's enjoying the most.

How do i unsee this

And while many were criticising the content, others reminded them that they weren’t being forced to watch it:

People were sharing how they didn’t find anything wrong:

There is ABSOLUTELY NO obscenity in this.

What do you think of the way netizens have reacted? Let us know in the comments below!