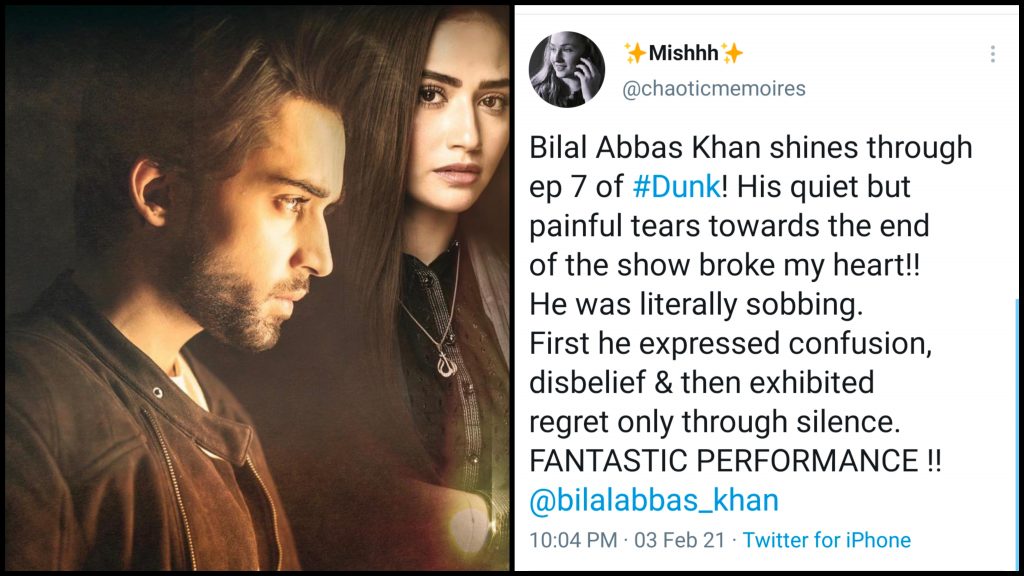 With a very intense episode of Dunk last night, Bilal Abbas Khan gave us one of his best performances to date, nailing every shade of Haider, torn between his love, guilt, regret, betrayal and doing the right thing.

His brilliant portrayal as Haider became the star of the episode last night and was a top trend on Twitter. And fans just can’t stop talking about it:

Give him an award only for this scene!
No dialogues but spoke 1000's of words just with his expressions and eyes…!
No doubt why he is everyone's favourite!! #Dunk #BilalAbbasKhan @BadarMehmood01 pic.twitter.com/GpbnXGvX7I

Couldn’t have said it better!

Bilal Abbas Khan shines through ep 7 of #Dunk! His quiet but painful tears towards the end of the show broke my heart!! He was literally sobbing. First he expressed confusion, disbelief & then exhibited regret only through silence. FANTASTIC PERFORMANCE !! @bilalabbas_khan

I always say silence is more powerful than screams and that's what Bilal Abbas Khan is pro at! He is the master of expressing every form of human emotions through silence only! Hats off to this insanely talented man ! @bilalabbas_khan #BilalAbbasKhan #dunk https://t.co/TRzdfNQ71Z

Oof, this scene gave us goosebumps!

That’s Bilal Abbas Khan for you:

No dialogues and yet the audience could hear the scenes:

In other dramas heroines make us cry but here our hero made us cry by his tears and priceless expressions. Have to say What a great performance Bilal Abbas is.#BilalAbbasKhan #dunk pic.twitter.com/W3Iguj9bQ9

@bilalabbas_khan was the star of today's episode!
I literally stopped breathing when I saw Professor's wife carry his Janaza.
And that last scene! HAIDER KNOWS!😱#DUNK

Fans were melting over his eyes!

Although #BilalAbbasKhan didn't have much dailogues to say but his eyes, his face, his body language said everything. So proud of Bilal the way he portrayed these emotions flawlessly !
HE FREAKING NAILED IT TODAY! 🔥
(His long lashes again got my attention, ok sorry!)#Dunk pic.twitter.com/MAnHtQlmXT

#BilalAbbasKhan you nailed it man! You nailed it with your eyes, even with the movement of your fingers when you were restless! Top notch! @bilalabbas_khan #Dunk

#Dunk the main essence of this series is Him ..! He acting is so genuine and bearth holding tbh
The heart touching series that can make you cry 😩♥️ pic.twitter.com/QGF0ewspZ0

Man was on fire!

BILAL ABBAS MY GOSH! What an actor this episode of #Dunk 🙌🏻👏🏻 pic.twitter.com/S1lIs1ubOB

How did you like Bilal’s performance in Dunk? Let us know in the comments below!