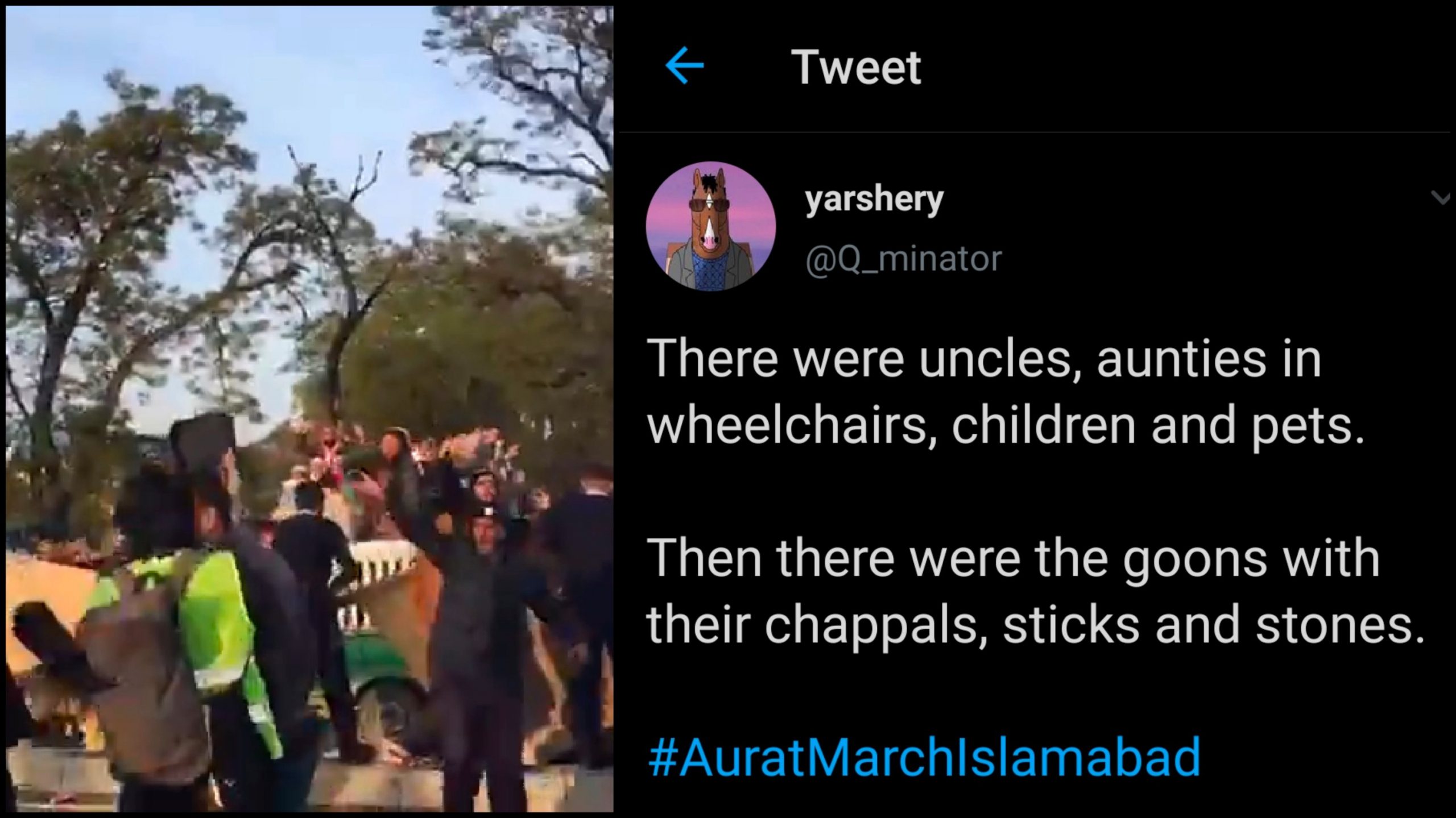 8th March marking the International Women’s Day all around the globe, several Aurat Marches were held all over the country and most of them turned out to be a great success except the one in Islamabad.

People from an opposing party tried hijacking the peaceful aurat march by hurling stones and bricks at the marchers, they also went to the extent of putting red chilli in the marchers’ eyes and things got very ugly in no time. With videos of the march being hijacked surfacing the internet, the netizens were appalled at the situation:

If Islam has given women all rights why are Mullahs stoning women at the #AuratMarchIslamabad ?

Have they abandoned Islam? Yesterday these men + ilk were quoting Surah Nisa 4:34 that men are "protectors of women", today they stone them?
Do not they not obey what Allah commands?

Many were standing with their fellow marchers:

We are alarmed by the attack on the #AuratAzadiMarch in Islamabad. Despite so much censorship and regulation the administration failed to avert security threats, which were known beforehand.

We stand with our fellow Marchers and hope for their safety.#AuratMarch2020

People who were attacked were sharing the horrific details of the attacks:

My dear friend @IsmatShahjahan was hit by a brick at #AuratMarchIslamabad today by jamait’s goons.

That’s why women march and will continue our struggle until the oppressors let us live in peace and with dignity. pic.twitter.com/8jbmwNM22T

Mullahs started attacking #AuratMarchIslamabad and threw pellets from a van. One of my friend got injured. Two other people got hit in the head. We had to find a safe spot as all the volunteers were asking us to keep moving. So mullahs practice this Islam?

I was with my kids in march and coming back to my car when a man sprinkled chilli powder on my face. How he brought chilli with him. Did no body check him @dcislamabad @AuratAzadiMarch @Tooba_Sd

No one was spared:

When Lal Masjid and Jamia Hafsa members/supporters started throwing stones at #AuratAzadiMarch participants. No one was spared. Neither police officials nor us media personnels. They were also hurling abuses and vulgar phrases. #InternationalWomensDay2020 pic.twitter.com/Yl7lmer4Kw

Not all men are trash ❤

People like Osman Khalid Butt had so many questions to ask:

And the difference between the two was clear:

There were uncles, aunties in wheelchairs, children and pets.

Then there were the goons with their chappals, sticks and stones. #AuratMarchIslamabad pic.twitter.com/t09l5AMXTL

Mullahs attacking the marchers with stones and shoes says more about them than the aurat march and its marchers. Such a disgraceful act, these participant mullahs should be thrown in jail. More power to the women and men taking part in the march. ❤️

Some even captured the perpetrators on video:

as the official magnet for all things insane, I got caught up in today's jamiat islami crowd and hooligans while they were throwing rocks and stones at #AuratMarch. Managed to record the face of one jamati coward.

The fact that a man threw chilli powder at a woman's face makes me so angry.. so angry. So sad because the aurat march in Islamabad was attacked by goons. @dcislamabad i urge you to take action. #AuratAzadiMarch

Exactly what we are up against:

The peaceful and constitutional Aurat March in Islamabad is being attacked by mullahs who are pelting marchers with stones and shoes and batons. This is who we are up against.

Scenes after the Participants of #HayaMarch started pelting stones and sticks at the participants of #AuratMarch in islamabad pic.twitter.com/J2HvSQxI7Q

People were also sharing heart warming stories of how the marchers helped each other:

Got hit by a stone on my foot and the incredible empathy and care of the Marchers literally astounded me. Corralled around me offering water , calling an ambulance, getting me a walking stick. This is where the mullahs fail, they incite violence and we incite care and love.

the most heartbreaking part of it all for me was that i really got to witness how they outnumber us. they were smug. i hope to see us take this country back from them in my lifetime #AuratMarchIslamabad

the mullahs started throwing stones at us. a little boy burst into tears. congrats you showed your true colors.hopefully the kid will grow up to resist. So glad I joined! #AuratMarchIslamabad #WomensDay

Some were trying to find reasons why it happened:

In Islam you pelt stones at the Devil. Maybe it shows what people who did that against the Aurat March think of women asking for rights. But I think I'm giving them too much credit. They are not theological, but just emotional and angry – same things they accuse women of being.

Some were calling it an act of terrorism:

Attackers of #AuratMarchIslamabad must be held accountable,its an act of #terrorism. I salute women,who stood their ground,against all odds- to highlight issues,they've been suffering through centuries.The dastardly attack validated why #WomensDay must be celebrated. pic.twitter.com/OT61PbDKw2

This is exactly why we need to march every year:

Pelting stones by miscreants on peaceful protestors of #AuratMarch is outrageous, reprehensible & shameful. Entire msg of the March was accepting, respecting & acknowledging rights of other's despite disagreement
Extremes to the right & to the left of any ideology is always wrong

People were lauding the leaders and the police who were trying their best to keep people safe:

More power to women leaders like @drfarzanabari – she was running around making sure everyone was safe during the attack on #AuratMarchIslamabad today, with little concern for her own safety. 💪🏽🙏🏽

Salute to Islamabad police for controlling the situation immediately; #AuratMarch is proceeding now. Organisers demanding the police to let the match proceed as planned.

But the women did not stop:

Undeterred by those trying to shut our voices and our March, we, along with all our supporters are at D-chowk right now.

People were demanding that the culprits be arrested and held accountable:

All the people who ruined a peaceful protest AND injured people by stoning them should be arrested. How did this even happen on your watch @dcislamabad? Aurat march organizers and protestors abided by ALL the rules. How did you let it happen?

An FIR has been registered against the culprits:

We are registering FIR against those who disrupted the Aurat March today. After inquiry people will be arrested. @ICT_Police worked very hard to ensure that situation stays in control but few elements broke the law and they had no NOC. Will update soon. pic.twitter.com/kvVvMMZ4ZG

What do you think about protestors pelting stones and shoes at the marchers? Let us know in the comments below!

Women of Power: 10 Most Dynamic Female Politicians of Pakistan

Oily, normal or dry, the best foundations that'll brighten up your summer 2020!