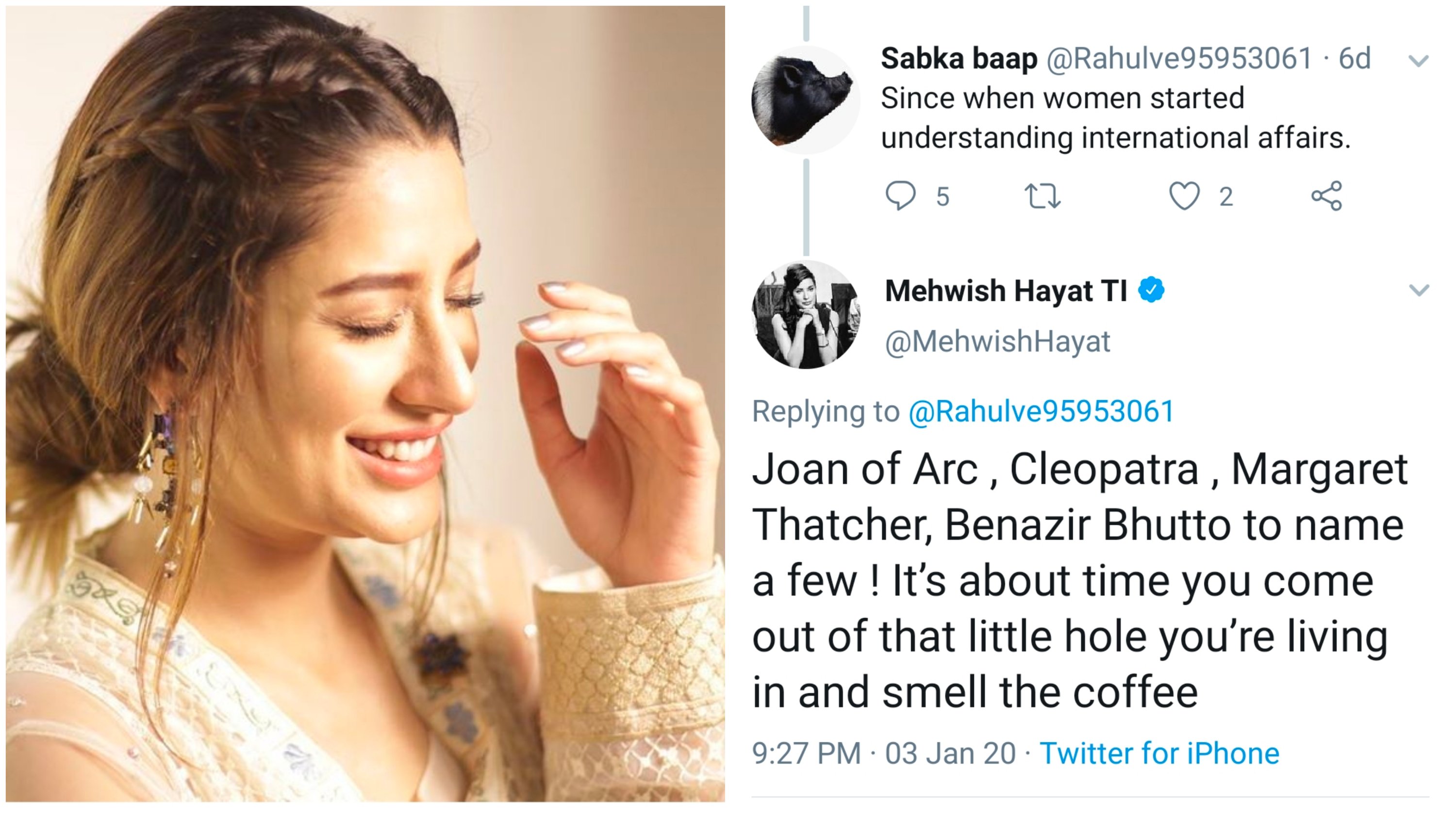 While many other celebrities choose to ignore the trolls, Mehwish Hayat makes sure she teaches them a lesson with her savage comebacks, and honestly, we stan this diva for her non-apologetic comebacks!

1. When she came back at Aamir Liaquat for calling her an ‘item girl’

Following the tension between Iran and the US, Mehwish went on to tweet how war is never the answer:

Can’t believe that just 72 hours into 2020 & the world is already teetering on the edge of war. I guess this is wht happens when the "leader of the free world"takes unilateral decisions without regard for international laws. This isn’t just abt Iran &USA.God protect us #Soleimani

And as the tweet caught attention of many publications, Aamir Liaquat tried throwing shade her way by calling her an ‘item girl’ and dismissing her opinion on war:

This "item girl" is exercising her democratic right to have an opinion whereas you keep stooping to making personal jibes and nothing more. Man up! BTW whatever happened to the case you were filing against me for “Load Wedding”? I have been waiting with bated breath …

2. When Mehwish taught the trolls that girls run the world!

The same tweet regarding war sparked another troll to think that women have zero knowledge of international affairs:

And Mehwish came hard at him, with facts!

Joan of Arc , Cleopatra , Margaret Thatcher, Benazir Bhutto to name a few ! It’s about time you come out of that little hole you’re living in and smell the coffee

3. When she called out the trolls on the word ‘BOLD’

Stepping into the new year, Mehwish shared how she was ready to take on the year until a man decided to cut in and call her out on her choice of clothes:

And Mehwish being the queen she is, spilled the tea ever so subtly:

4. When she wanted the world to stop using derogatory terms for artists

Sharing her opinion on the issue of rape and rapists, a troll accused all artists of being rapists too by promoting ‘be-hayai:’

And Mehwish was just not okay with the derogatory terms being used:

Aakhir Kab tak artists ko “Kanjar” jaise alfaaz se nawaaza jayega.. ? Why do we face these derogatory remarks .. ?! whereas historically, art has always been the window to society and artists deserve respect if not acknowledgement

5. When she added TI to her name on Twitter

Once questioned about the point of adding TI (Tamgha e Imtiaz) to her Twitter name by a follower, Mehwish let the world know how it was now a part of her identity that she was proud of!

Yes – because it’s a part of my name and identity. Something I am very proud of.🎖

6. When she proved having an opinion does not make her anything less

Sharing her opinion on the Musharraf verdict, a troll tried putting Mehwish down by using unacceptable terms:

But Mehwish made sure she taught him a lesson:

Having an opinion doesn’t make a woman a “Randi.” Please leave your gutter language for the playground and learn to show some respect !

Oh boy, you clearly have a brain of a fish – I feel sorry for you

7. When she proved she had balls and Tamgha Imtiaz, both!

After her tweet on the Musharraf verdict caught attention, people couldn’t stop throwing shade at her:

Right. Now to the important business, what does Mehwish Hayat think of the verdict?

At least she had the balls to give an unpopular opinion; your silence on the other hand after Hameed Haroon's name was linked to the Jami sexual assault case was defeating!

Okay. Correction: She had the balls. I thought she had Tamgha-e-Imtiaz.

And guess what? Mehwish left them speechless!

8. When she proved she had no plans of being bodyshamed

When you’re a celebrity, you’re always scrutinized head to toe, a troll tried body shaming Mehwish on her ‘back’:

And Mehwish turned the tables like the pro she is!

Yes – squats paying off . Thanks for the compliment !

9. When she revealed who was that someone big behind her success

A troll accused Mehwish of sleeping her way to success

And she finally spilled who it was behind her success, winning the internet in every possible way:

10. When she asked questions that mattered!

To say it once and for all, Mehwish had it all summed up for the trolls in one tweet:

What do you think about Mehwish Hayat’s savage comebacks? Let us know in the comments below!

Diva Jukebox: 10 Pakistani Songs That Made It To Your Playlist The Most This Week!