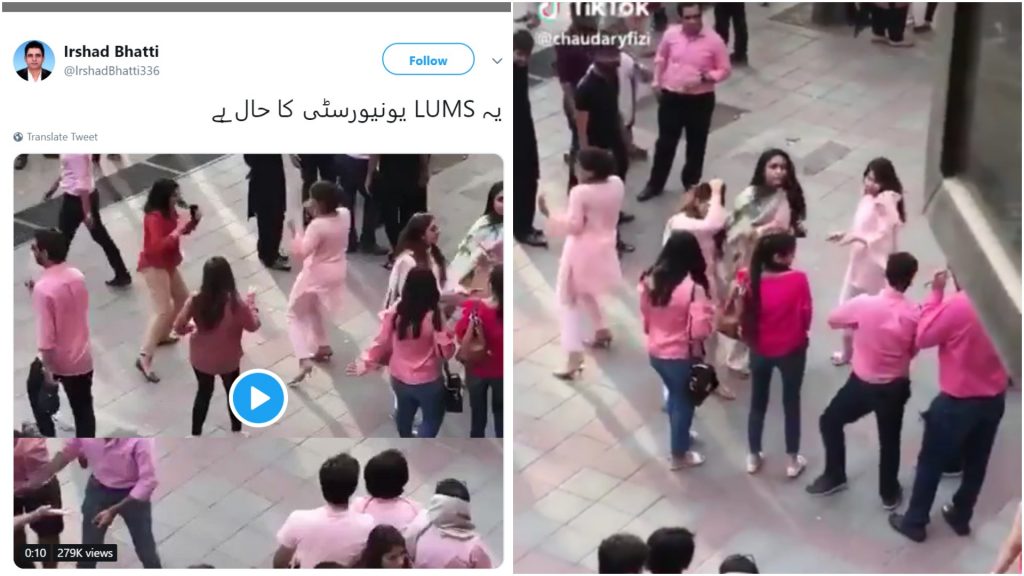 In today’s segment of Pakistani-awaam-triggered, we bring to you a 10-second long video from LUMS which has been going viral on the internet and is garnering a ton of feedback.

Soon after the video went viral, #LUMS became the number one trending hashtag on Twitter. 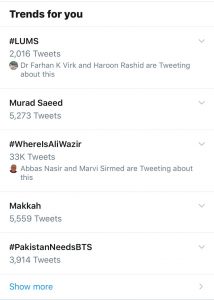 The real story is that the Pink Day was being celebrated to raise awareness for breast cancer in Pakistan and it’s a normal practice in many institutions to celebrate these days to create awareness amongst the masses.

Celebrating the Pink Ribbon Day at #LUMS today to raise awareness abt breast cancer. Around 90,000 Pakistani women suffer from it each year.

Another twitter user came forward to clarify that the video was from April, and his thread literally serves everyone right!

Okay so first of all, you guys need to understand that the whole pink day fiasco didn’t even happen in Ramadan. Pink day was on the 3rd of April and the color days are something the seniors look forward to before leaving lums so your whole argument about haram cheezain in ramdan-

is already a false accusation. Secondly, please for God’s sake stop judging people and objectifying women at least in Ramadan. Do you have any idea what these people go through everyday? Phele hamare semester ka depression and then we have to tolerate all this non-sense about-

us being “kAnjaRs”. I’m not even kidding about the amount of sexual harassment women go through and you guys have the audacity to comment on their character as if they are not traumatised enough. Lower your gaze. Roza srf Aurton ka ni mardon ka b ha. But no wo to hmse hota ni –

Even tho I’m one of them and I do not endorse most of the things that the lums community try to impose, I still am accountable for my own ibadat and so are you. Thanks#LUMS

But the damage was already done, people were fuming over a couple of students enjoying a brief moment, there were countless judgments, shaming and opinions:

The question is what is being taught in the university these days? #lums
We r Muslims and yes we r not perfect, we have flaws, but this dance party? This is not us, that too in the month of Holy Ramadan.
We need a minute to think about where is it leading us?

What The Hell Is Going On.. On This Islamic State..
Such A Shameful Act By #LUMS
They Don't Have Even Respect For Ramadan….

Not only #LUMS but QAU and other universities are following the same line. At least respect your culture if your secular/atheist mind has problem with the religion.

when you blindly followed the western traditions, then such crappy things have to happen. "Grotesque" is the word fits upon #LUMS students.

A lot of people came out in support and gave befitting replies:

Did not get you about things in trails. It is the culture of this university from the very beginning. You will se students doing tableegh and girls wearing hijab at the same time. Hindus and Parsis and Muslims sharing rooms and meals. #LUMS is above all this.

I fail to see the issue in the video? Don't you live abroad and have your children in the academic institutions that might host same type of events. Shouldn't you be caring about that?

Some put out facts to prove their point and oof, the burn!

Lets some things be secret it is useless to discuss it publicly the time is over for such criticize
They are from elite and in power class and you couldn't do anything to change them .

Spot on! Where’s the law?

Is there a law which says not to dance? There’s definitely one against stalking and sharing someone’s images online without their consent.

Looks like LUMS is surviving and keeping its freedoms even through the onslaught of continuous moral policing, intolerance and misogyny. https://t.co/Tu3dhdV6mB

As a student and students activist I feel ashamed of our media, we live in a society where a stupid anchor/analyst can viral a video of students dancing but can never talk about ban on students unions, rights of students and how favouritism has weakened our education system#LUMS

Some reminded people how the students in the video were mature enough to make decisions:

Everyone is responsible for themselves. Everyone in the #LUMS video is mature enough to distinct between whats right and whats not. But the QUESTION arises that is invading one’s privacy and sharing the video with their consent is right?

Those who are trending #LUMS and talking about the dance video and associating it with Ramadan. Well I would just say one thing. In this Ramadan let people live their lives and let Allah only judge people. Stop being Gods 🙏

The video of #LUMS students dancing, which has started trending on social media is a typical example of what we call moral panic. The country is literally burning, and some fools are worried about a few kids having a bit of harmless fun. 🙄

Oh boy, that must have burnt!

If all you weila people invested half the time you waste on twitter daily condemning #LUMS or other non-issues, you’d actually have made it to LUMS or some other equally good university.

STFU and go do something better with your lives.

Some were genuinely worried about the invasion of privacy

why is no one talking about how problematic this invasion of privacy is…? more so from the person in LUMS who posted this video on a public platform w/o consent of those whose faces can clearly be seen in the video #lums https://t.co/mgS4iKIkfy

I am not on anyone's side but what has made that person to privately capture a video of a private uni event & show it to the whole country? Nah if they are doing wrong preach them,but do not make their private videos to spread it so that every other one can take 'chaskay'. #LUMS

About time people started talking about the real issues!

Guys,
Stop Criticizing #LUMS
They are dancing. Thats all. We dont raise such issues anymore. World Moved on, way long ago. Please Talk about Bigger problems;Women opression and rape and harrasment and sectarian voilence
All of these shouldnt be a part of ISLAMIC REPUBLIC too.

DEFINITELY! Infact, every institution should add this course to their curriculum

#LUMS should add a course in their curriculum which is called 'PRIVACY'. I am sure it was a lums student who create this video in this angle and spread it.

People have been speculating that the ones who are fueling hate towards the video are salty LUMS rejectees and the tweets are beyond hilarious!

There have been countless cases of rape in Ramzan but I havent seen it getting as much attention this 10s dance in LUMS is getting.
Hatred #LUMS getting now a days is only because of exasperation from those who didnt get into it.
We seriously need to look into our priorities.

It is for these reasons & shallow minded people that I am so opinionated about living in #Pakistan. It is about time people understand the concept or #Freewill & Apne Kaam se Kaam Rakhna! Apna admission nai hua tou accept kro apna failure. Let them Live #LUMS https://t.co/yKtFj6uX26

NO ONE: All those rejected from LUMS: Mein tu behayaye ki waja se nahi gya. #LUMS

We stan a good spongebob meme

You can always count on Twitter to bring out humour in every situation!

One more reason to pursue higher studies at #LUMS, I just love the atmosphere LUMS offering to it's students.

WE should be debating that who was showing best moves rathwr than judging their character .

The song was lit though!

Me after watching the #LUMS clip!
Literally the music was totally kickass!👌😂😅 pic.twitter.com/0YQ807ZONn

To be very honest, the issue wasn’t that big. First of all, the video should not have been shared publicly to be made viral without the consent of the students.

Second, facts should have been checked before running a smear campaign against a bunch of students.

And third, everyone in the video is mature enough to decide what’s right and what’s wrong and are answerable for their own deeds because last I checked we have been promised a judgment day by Allah and not some woke Muslim brothers and sisters on the internet.