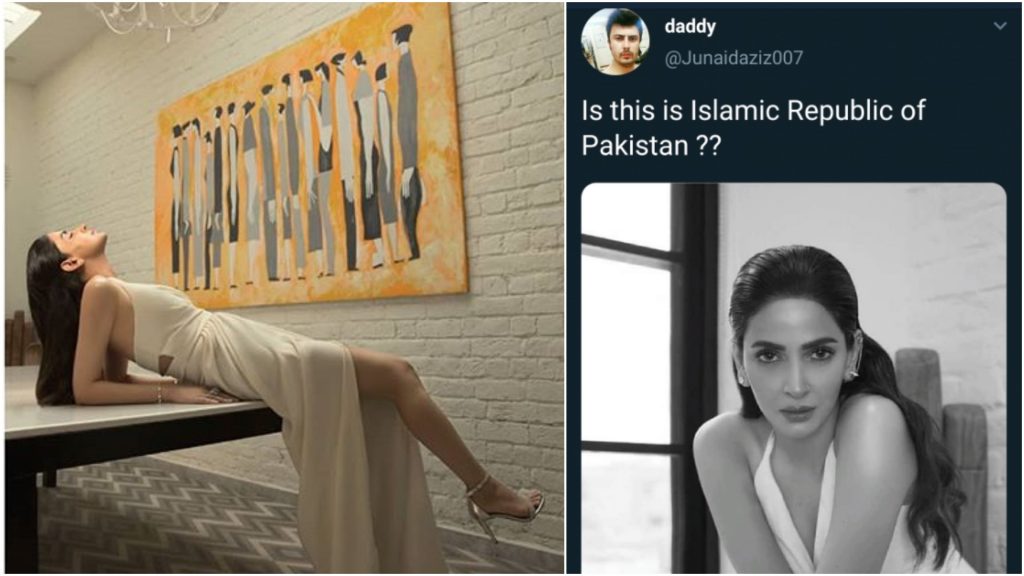 It’s 2019 and some woke Muslim brothers still think its okay to shame others for their choices. This guy Junaid Aziz who claims to be our ‘daddy’ posted a gorgeous picture of Saba Qamar questioning twitter if this was the Islamic Republic of Pakistan:

Is this is Islamic Republic of Pakistan ?? pic.twitter.com/50yA34uevR

And he was joined by a few more:

What a shame! First she is a Muslim and than she is a Pakistani and such dress are not allowed in Islam and our country. Saba Qamar is just a shame. She doesn't deserve to be like and love her acting. #SabaQamar pic.twitter.com/3YfWYcHU15

And the twitterati came to her defense in no time, with replies so savage they’ll make you chuckle!

No, this is Saba Qamar. https://t.co/cOQJQSlA4M

People explained to him who she was:

She is Saba Qamar. She is one of the best actress of Pakistan. She also received “Tamgha e Imtiaz” in 2012 and “Pride of performance” in 2016. First Pakistani actress to get nominated in Filmfare. She can carry any drama on her shoulders and don’t need a hero for a hit. Aur kuch https://t.co/cXashCYT99

Questions we should be asking:

Why do Pakistanis rely on celebrities to be a role model for anything? 🤷🏻‍♀️

Honestly, even we don’t know when:

when did saba qamar change her name? https://t.co/rxZuGWOY7s

Ok once and for All,
People who blame ISLAMIC REPUBLIC OF PAKISTAN for all the unislamic things happening. Sorry people, Quaid e Azam didn't mention Saba qamar's dress code in his 14 points. Now stop it✋

The truth was spoken:

So Saba Qamar's latest shoot triggers people now.
We can never rise above the confusion of religion vs society vs art

I have forgotten her name but definitely she is not Islamic Republic of Pakistan, nope!

Many showed him what he was mistaking Saba Qamar for:

No this is Pakistan she is Saba Qamar pic.twitter.com/pMvxbq2atu

Exactly, all hail to the queen!

this is republic of saba qamar zaman
its her dominion https://t.co/p0PxUoTXYt

He wanted to share the photo but also wanted to make his tharak halal. #creativeSolutions https://t.co/Ot5wtpdu6B

People were rooting for her and her right to wear whatever she wants:

Nothing wrong in Saba Qamar Photos. She have right what she want to wear 🙂 #SabaQamar @iamsabaqamar

Some pointed out the sad realities and the issues that we need to talk about:

No, its a photograph.

Some called him out on his hypocrisy:

Okay But WHY IS SABA QAMAR SO FREAKING GORGEOUS. https://t.co/XQONLAGIhJ

People were all for her:

islamic republic of pakistan can step on me https://t.co/Ayvw67EuIw

Many came at him asking him to worry about his own self:

Oh shut up u all

Having a no 1 position of pak on internet for watching sex movies, How could u blame Saba Qamar for wearing shorts.
Shame on u who has involved and linked this matter with islam.
First see your "Gireban" make urself perfect then u have rite to talk.#SabaQamar pic.twitter.com/8jdXlQIJWB

Some reminded him that she was a lady:

No this is Saba Qamar's country we're just allowed to live in it. 😍 https://t.co/CwM6FM5Dle

What saba qamar decides to wear is none of our business. She is an adult and she knows what she is doing. We can't be the judge here! Get a life!👀

What do you think about Saba’s latest photoshoot? Doesn’t she look ethereal? Let us know in the comments below!

Love is definitely in the air as Imad Wasim ties the knot!

Diva Jukebox: Top 10 Songs That You Loved This Week