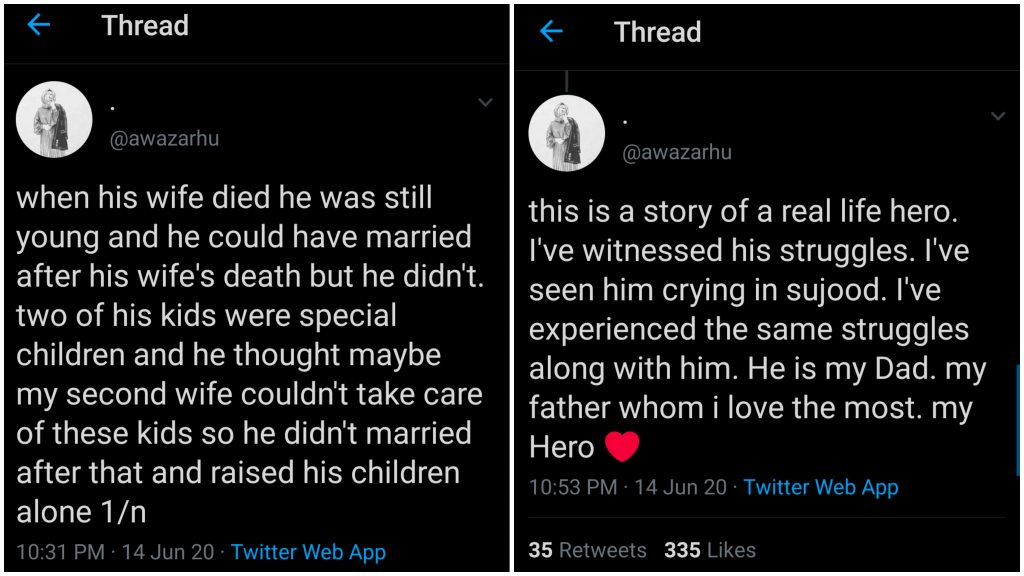 Parents are irreplaceable, no one can love you like them. Taking to twitter, a girl shared how her father single-handedly took care of his children, two of them being special, with utmost love and care!

when his wife died he was still young and he could have married after his wife's death but he didn't. two of his kids were special children and he thought maybe my second wife couldn't take care of these kids so he didn't married after that and raised his children alone 1/n

She then revealed how people used to discourage him all the time, but he didn’t pay attention to them:

people around him used to throw discouraging comments at him for having 5 daughters and raising them alone. he didn't listened to anyone. he educate them well he raised them well. his income wasn't much but he didn't let his children worry about anything. 2/

She shared how none of it was ever easy:

She then continues to share how the pain of his specially-abled children still haunts him:

How the son he thought to be his right arm, was fully dependant on his support instead:

the eldest son who was supposed to be his right arm who's in his thirties now can't even do anything by himself and is completely dependent of his father. his body is becoming dead day by day. his brain isn't working well since he was a kid. 5/

He often finds himself worrying thinking what would happen to his children after he’s gone:

he has spent all his money on this child all his love and attention for this child but the son isn't getting any better. the father is worried for his kids now what will happen to them after his death?? but again he has firm belief in Allah and left everything to Allah. 6/

He’s a hero who trusts his God blindly and knows He’ll take care of his children and ease their pain:

this is a story of a real life hero. I've witnessed his struggles. I've seen him crying in sujood. I've experienced the same struggles along with him. He is my Dad. my father whom i love the most. my Hero ❤️

With that she adds how people should take her story as a lesson in trying times:

shared this with u guys just to tell y'all that don't cry over little things you lost now but look at the ones having a lot bigger struggles in their life but they're still smiling because they know all these miseries are temporary.

She further adds how most of us take these things for granted rather than taking them as blessings:

And her story has people lauding her dad for being the hero that he is:

What a hero ♥️

“At the extremity of hardship comes relief and at the tightening of the chains of trials and tribulations comes ease.” https://t.co/6sRN2LQ13H

You all need to read this thread.

I got chills and tears start pouring down my cheeks while reading this thread 😞 May Allah bless all the fathers. They are our heroes. https://t.co/pysXBXZzAZ

Having faith in almighty is one thing that keeps a personally moving and Indeed your father is the strong person and more power to him and all of you!! Indeed Almighty loves you all for your patience indeed He's with patients! May Almighty bless you all with good health Ameen! https://t.co/pxlAevOEIu

People were calling him a super dad, and rightly so!

A very inspirational story. Story of a super Dad. Must read everyone. https://t.co/vmJX78ZCJf

People were sending love and prayers her way:

What a hero ♥️

Your father is undoubtedly a hero. He will get reward for what he had to pass through. And you are equally strong riffu. More power and blessings to you your father and your family. 🌸🌸❤️

Huge respect for your father. More power to you and him. May he live long and may Allah bless him health.

Many agreed how we can only aspire to be like him:

Guys like us can only hope and aspire to be half the man your father is. More power to him, more Sabr to him and all the world's happiness to all of you. Mashallah & Inshallah.

Most definitely a king!

Your father is a king! I sincerely hope all his duas come true 🌸

Isn’t this the best thing you’ve read today? Let us know in the comments below!