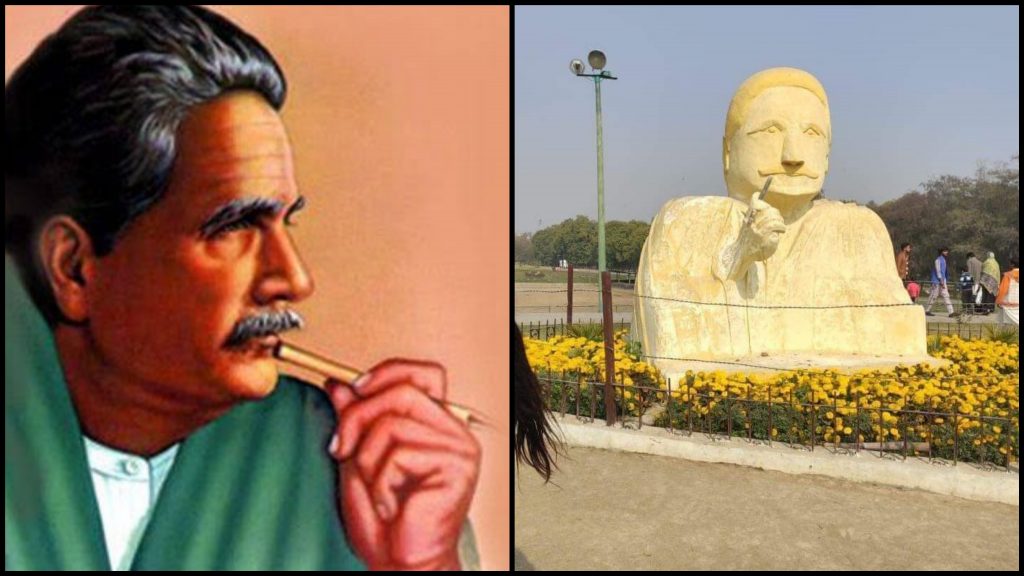 In a country full of great artists, we’re spoilt for choice and are used to seeing nothing but the best when it comes to sculptures!

As a tribute to the iconic poet Allama Iqbal, a sculpture was erected in Lahore’s Gulshan-e-Iqbal area which can be seen below:

Iqabl's sculpture in Gulshan-e-iqbal Lahore, there is nothing wrong about the sculpture except the part that it doesn't really look like Iqbal pic.twitter.com/zuNyrvXrmB

The only problem: it looks nothing like the national poet and people are furious!

This is further proof for my belief that the worst thing to happen to Iqbal was Pakistan https://t.co/PrxsoXWFh1

People wanted to know who made it:

#Allamaiqbal and his statue in #Lahore don't have any resemblance. Who did such a horrible job? Don't you have any good sculptors in #Lahore? pic.twitter.com/joFqadRH3m

People were sharing their thoughts:

#AllamaIqbal ’s statue doesn’t surprise me at all … it’s in line with how we have deformed the country, it’s polity, it’s culture and ideology of its creation.

People wanted to government to look into it:

In a land of artists, this is a travesty.
If this is a recent picture, it is sad. @MashwaniAzhar and those concerned with Punjab Govt., kindly look into this and see how it can be improved.
•A nation’s leaders must be shown respect in every way.#AllamaIqbal https://t.co/jSPsCiSdBh

People were calling it a joke:

Just saw these pictures saying "They have just unveiled a new statue of Allama Iqbal in Gulshan Park Lahore"Can anyone confirm if this is true…if yes, this is unacceptable 😡 is this a joke, who approved it?
#AllamaIqbal pic.twitter.com/htnYiZbmit

People were focused on different details:

We're all focusing too much on the face but something deeply disturbing about that hand coming out of the bust https://t.co/5BWuswSOh2

People wanted it to be removed asap!

Very poorly designed sculpture. It should be removed immediately.

Some found it resembling uncle Sargam more than Iqbal:

Imagine being a historical philosopher and poet and ppl memorialise u with a statue jis mein tum pen chuba rahey ho https://t.co/KuO0XQz1Vk

People were calling it ‘artistic revenge’

Hehehehe this is called Artistic Revenge 🤣 I like it though https://t.co/izv0x4I5Eq

People were sharing how this was a common man’s love, not to be compared with artists:

This sculpture isn't made by any artist but by gardeners and staff of park as a homage to Allama Iqbal ❤️ so it's cute, i think that a common man is trying to connect with their history❤️❤️❤️😍😍😍https://t.co/5123L7TucV

I know it’s a very poorly made statue but it was just a gesture from the GARDENERS. They’re not professionals at sculpturing. People under this tweet need to be a little more kind. https://t.co/AT4x65Qjvw

People couldn’t believe it was real:

thank god our gulshan has no iqbal https://t.co/1XOEzDCV0W

People wanted others to be kind:

In truth it is not such a big scandal and for the people who don't let an opportunity go w/o taking their hate for Iqbal out to act as his admirers today, that's the true scandal

People had their own interpretations of art, it is subjective after all!

NAWWWW he literally lookin like the guy Courage thought was turned into a burger by those evil piggies 😭😭 https://t.co/RsD6WPNDS6 pic.twitter.com/Zbh7LIx4T4

And while some were furious, others turned it into a meme fest!

When you lie on your resume but still get the job https://t.co/Abb9Lb2LX9

When you have a “shikwa” with god and s/he gets backs at you. https://t.co/IcYokgzWLP

*complains about back pain*

What do you think about the sculpture and do you think it should be removed? Let us know in the comments below!

People Are Sharing The Worst Responses To 'I Love You' & We're Living For The Replies!