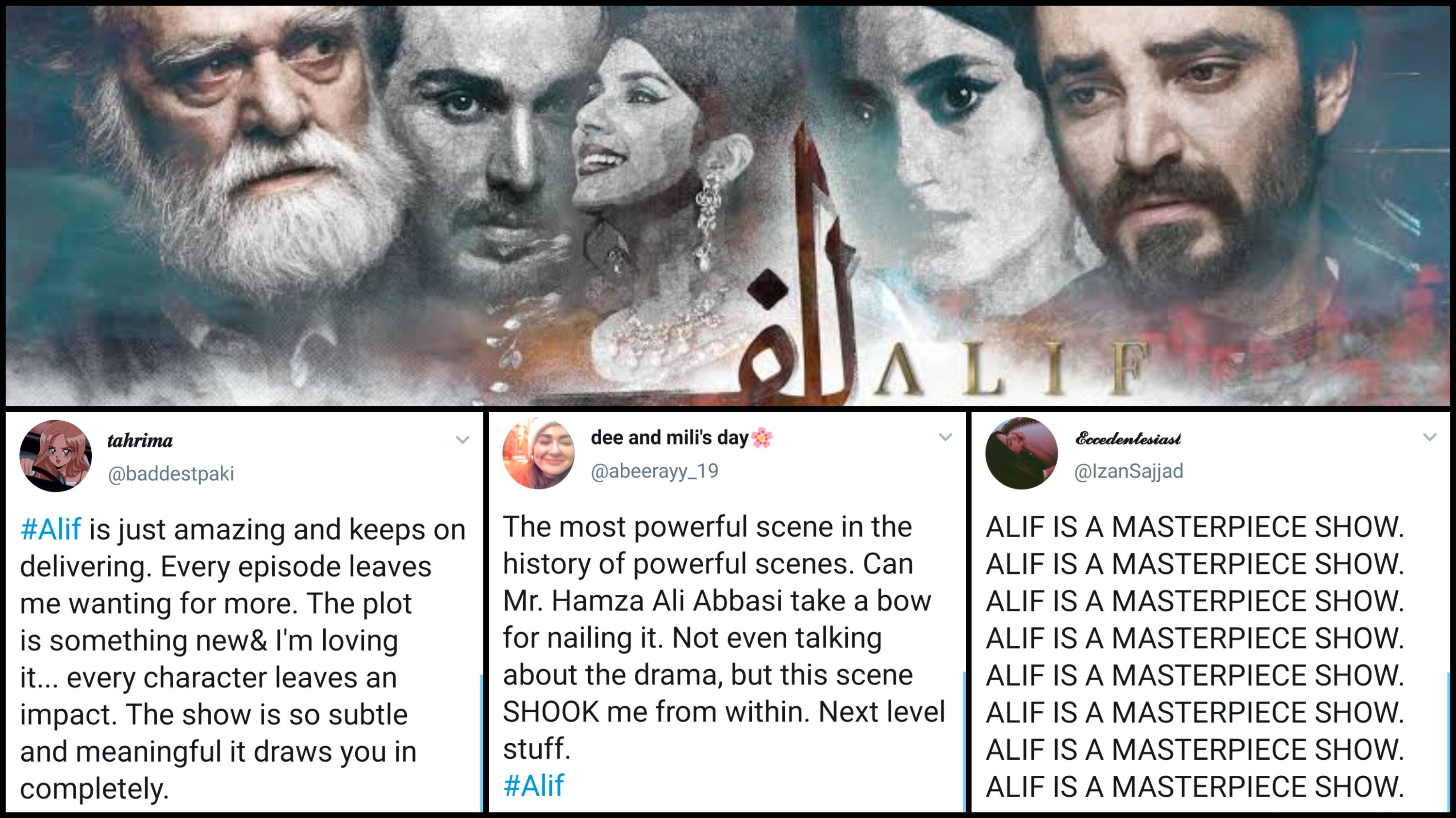 Every Saturday we witness two of the most powerful dramas on air, Alif and Meray Paas Tum Ho.

And both the dramas are in a league of their own and have absolutely no comparison, but last week’s episode of Alif where Abdul Aala dies was absolutely heart breaking and has wooed the audience by delivering one of the most powerful and blithering episodes that the internet just can’t get over with:

People were blown away by Sajal’s character Momina Sultan:

The Purity of this Scene 🤧
Where people were talking & celebrating about her Oscar but she instead of partying was reading the Quran 💖💖@Iamsajalali
Kudos to you Sajal 💖
You Nailed Character of Momina Sultan with ur Dialogues & emotions 💓#Alif pic.twitter.com/xasqtCAQee

Momina Sultan – one of my most favourite female leads! What a beautiful & powerful character and Sajal is portraying it so so well. ❤#Alif • @Iamsajalali pic.twitter.com/XtSNWPlsm6

Definitely a performance that’ll be remembered for decades!

Today's Episode of #Alif and THIS SCENE was the reason why Hamza Ali Abbasi did this project!!!! The Allah's message has been delivered and How!!! 💥💥💘💘 @iamhamzaabbasi You are incredible man!!!! Kya Rooh ko hilaa dene wali performance di hai!!!! Rulaaa diya!!!! 😭😭😭😭❤️❤️❤️ pic.twitter.com/MZe4nRecUc

It's a masterpiece
No doubt that it's rating is not coming as super hit drama. But the dialogues, the relation between "ALLAH & insan" it's beautifully described in this serial❤️#alif pic.twitter.com/MxNE563Iaf

People were finding answers within the drama:

A reason why we are loving this drama #alif to me is. We all are having questions to ask from Allah.But He is silent. No answer!
Stop for a while and rethink.He already did answered our every question.But we're too lazy to open the answer Book. For Him present past future is same pic.twitter.com/9G01ugaQuD

Oof, a scene that gave us goosebumps!

Something we all can learn from:

She had success, celebrations and fame but she was still holding Quran and was sharing her feelings only with Allah for He is the best Listener only !
That was Momina Sultan depicting how to celebrate your success ♥️#Alif

Now that’s what you call the power of an OST:

The OST in the background started at such an amazing point and the lines totally matching with the situation,increasing the impact of the scene if you feel it💯#Alif pic.twitter.com/YJWYUSHgb4

People were sharing their favourite scenes from the drama:

This scene was and remains far too powerful and impactful. I will miss Dada in Alif so much. His character has been undoubtedly my favourite in #Alif. 💛 pic.twitter.com/aIjZ4gAfG0

One of the finest scenes the industry has given us:

The most powerful scene in the history of powerful scenes. Can Mr. Hamza Ali Abbasi take a bow for nailing it. Not even talking about the drama, but this scene SHOOK me from within. Next level stuff.#Alif pic.twitter.com/n5g67OZfFV

This had us in tears:

"THE LAST MASTER IS GONE."

I am crying. My most favourite character – Abdul Aala. This show is beautiful. 😭#Alif pic.twitter.com/Z1EJsfiTfc

People are impatiently waiting for the next episode:

The Next Episode is Gonna be a Record Breaker ♥#Alif pic.twitter.com/elXbSJNkO7

#Alif is the best drama and you cannot disagree.

It had people thinking about how temporary this world is:

Tonight's episode of Alif was so powerful.
It shows that everything in this world is temporary.
Our happiness,sadness, success, celebrations,failure everything.
With each episode,Alif actually made me question my relationship with Allah.#Alif

When someone say: "#MerayPaasTumHo is better than #Alif"
Me: pic.twitter.com/GKeNsnx6kE

It is a life-changing drama for sure:

Hamza Ali Abbasi is sheer brilliance as Qalb e Momin! You can see that its not just acting , there are true emotions involved, those tears are not just for the role…you can feel the purity of the emotions!!
Ill state this again that this drama is life changing!#Alif pic.twitter.com/i2ifX0KO47

A scene we loved:

{ this scene will have a separate fanbase }

#Alif is just amazing and keeps on delivering. Every episode leaves me wanting for more. The plot is something new& I'm loving it… every character leaves an impact. The show is so subtle and meaningful it draws you in completely.

Are you keeping up with Alif? Let us know in the comments below!

People are coming up with English words that sound like Urdu and its hilarious!

Here Are 5 Reasons Why Masarrat Misbah Is the Definition of Women Empowerment!