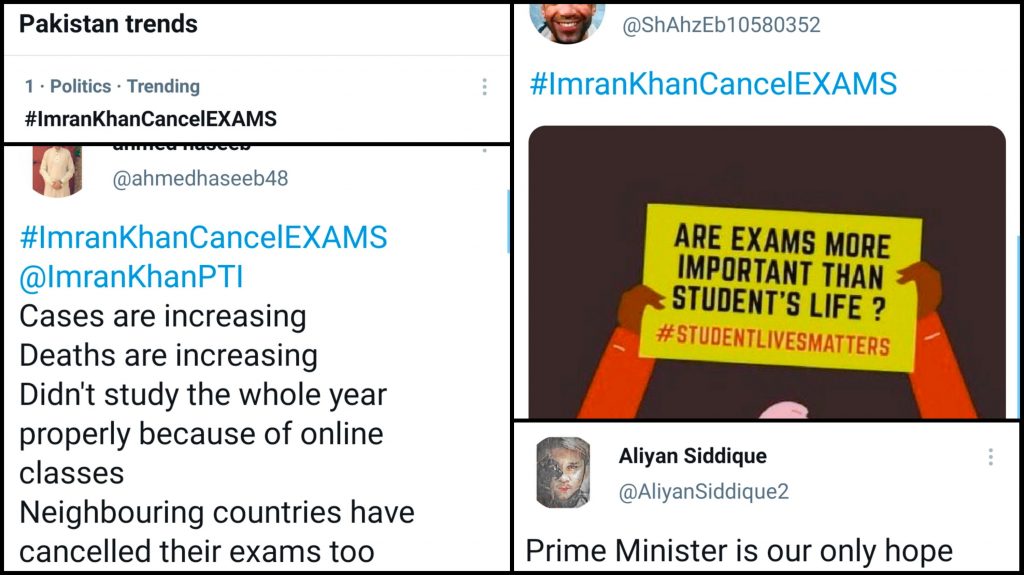 In the wake of the third wave of the pandemic, students have been consistently protesting to cancel their physical exams and resort to online exams. But despite their protests, the chances of the exams being cancelled have been looking slim.

With failed attempts to convince the education minister, students are now looking to their PM Imran Khan hoping that he will intervene as they trend the hashtag #ImranKhanCancelExams

And here’s everything they’ve got to say!

Students are the future of this country, they are already very worried bcz of Corona & if u ask them to take physical exams after closing schools bcz of Corona for the whole year, it is cruel.Pls be kind to the Students, We are not mentally ready for Exams#ImranKhanCancelEXAMS pic.twitter.com/48nTFMWrs0

People were calling it unfair:

…@ImranKhanPTI & @Shafqat_Mahmood pls Cancel the Exams of the students Matric & Intermediate. Schools & colleges were closed for the whole year & taking physical exams from the Students only after studying for the last two or three months is a great abuse.#ImranKhanCancelEXAMS pic.twitter.com/0TWLNV7wr4

People were rooting for Waqar Zaka as the next PM:

Students were sharing scenes from their classrooms:

Students were sharing how their future depends on their grades:

Cancellation of CAIES is important as our grades play a key role in our lives and future and currently it is not possible to perform to the best of our abilities. If these papers are not cancelled we wont forget that you didn’t stand up for us #ImranKhanCancelEXAMS @ImranKhanPTI pic.twitter.com/vl7xe1Q7v1

People wanted to know why the PM was silent:

Mr. Prime Minister , with all due respect , simply tweet a reply , what is ur opinion regarding students of Pakistan getting relief ? Whether Interboard or matric or federal or Cambridge ? . Why PM is not interested in replying ? #ImranKhanCancelExams

Students wanted to know why their government wasn’t taking the rise in cases seriously:

They wanted the government to wake up:

#ImranKhanCancelEXAMS @ImranKhanPTI Sir how can u expect students to risk their lives and appear for the examinations in these circumstances. pic.twitter.com/5yALvXPZNG

Students were sharing how PM was their last hope:

People wanted the exams to be cancelled to avoid disaster:

#ImranKhanCancelExams@ImranKhanPTI
Dear PM!
With due respect it is stated that the majority of the countries around the world have cancelled their exams due to the pandemic then why can't we? Even when the positivity ratio of our country is sky high… Plz sir we need you! pic.twitter.com/qosqsYg3qk

what's the most absurd part about this entire situation is the fact that prime minister @ImranKhanPTI apparently the "leader" of youth has not said a single word. apparently, it doesn't matter if students d!e,,,,#ImranKhanCancelExam#CancelExamsSaveStudents#ImranKhanCancelEXAMS

People were loud and clear!

What do you think about this hashtag? Should exams be cancelled? Let us know in the comments below!

Boys Share The First Thing They Notice In A Girl & The Replies Are Interesting!

Pakistanis Put Their Differences Aside & Ask Imran Khan To Help India With The Oxygen Crisis!