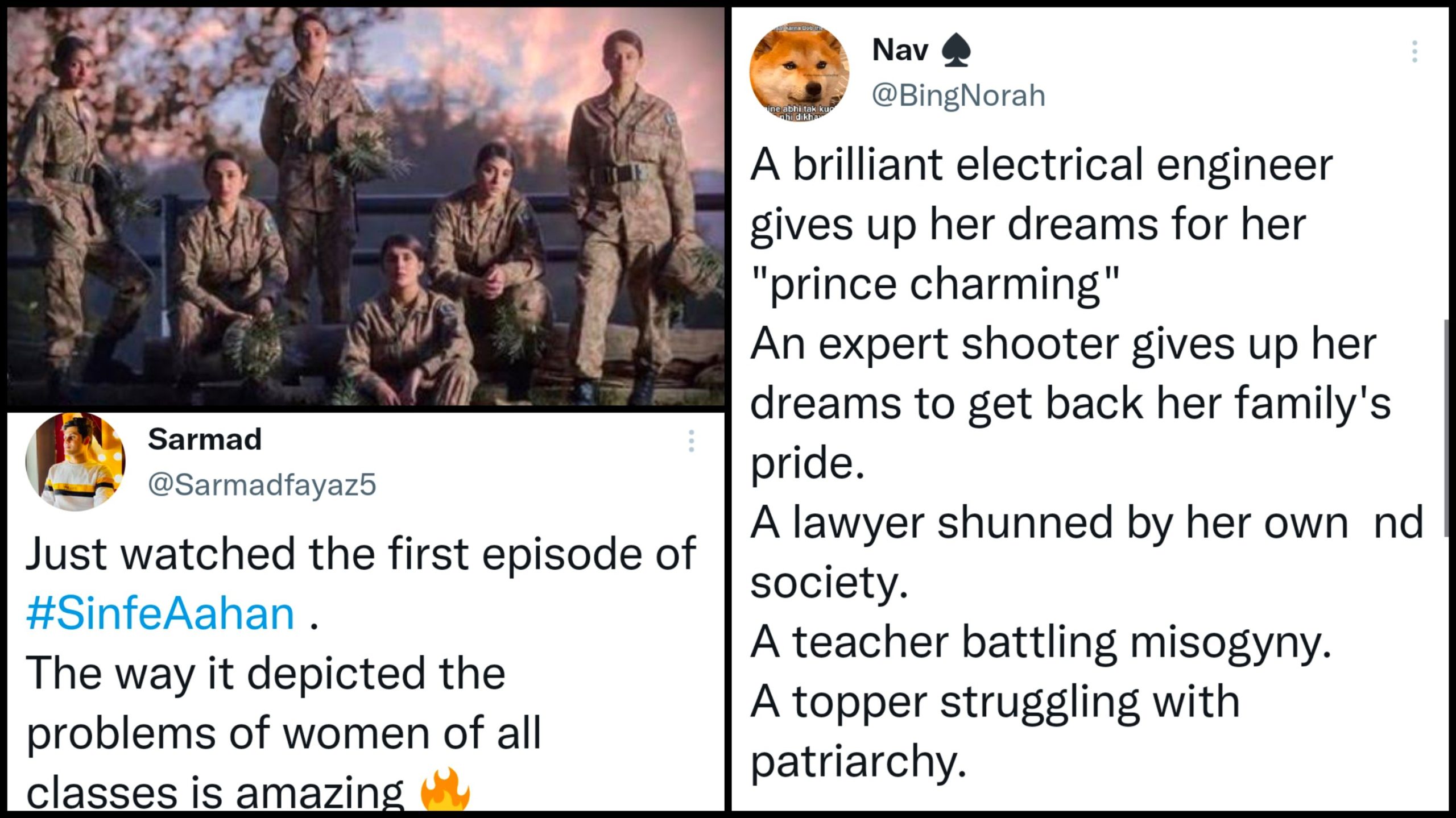 One of the most anticipated dramas this year, Sinf-e-Aahan, just aired its first episode on Saturday. Off to a great start already, the drama has gathered a massive following within one episode.

Days after the first episode aired, the drama is still one of the top trends on twitter and here’s what people thought about the episode:

Everyone has their own struggles, their own problems and their own desires, and that was so relatable to our society in so many aspect.
More power to You #SinfeAahan Girls 👑🔥♥️ pic.twitter.com/ZMIDFlBO59

loved the epi SO much! and characters even more! it was so good to watch all of these powerhouses of talent together on screen, everyone has such amaziiing screen presence. women of steel for sure🤍🔥
can’t wait for more<3#SinfEAahan pic.twitter.com/F2MvayP0DI

People loved watching Sajal standing up for herself:

sajal aly – the actor is unparalleled.

How we missed watching her on-screen!

can't take my eyes off this woman😩❤

So after 30 yrs, he will be again lecturing his juniors on the mess table. But the difference is, he was then a GC, now commandant of PMA. #SinfeAahan #ISPR #PakistanArmy pic.twitter.com/l5p70Z2nCR

Now we know how Pariwash can hit perfectly on her target. It's in her genes. 😂😂#SinfeAahan pic.twitter.com/5F5L4NmkoC

She was spot on!

Just watched the first episode of #SinfeAahan .
The way it depicted the problems of women of all classes is amazing 🔥
This is the thing that our drama industry should focus on!
Hats off👏 pic.twitter.com/CU3ELaXjlI

what a great start! absolutely loved the first episode of #SinfeAahan. something about this drama hits different, i'm so excited to see their journeys. its the first episode but i'm already invested in their stories and characters. MY GIRLS ARE THE BEST!! 💚🤍 pic.twitter.com/OUSNwTREJC

Every girl in Pakistan go through these 40 seconds every time they step outside their homes. #SinfeAahan pic.twitter.com/KGJiepC8O1

Can’t wait to see how the story unfolds for them:

A brilliant electrical engineer gives up her dreams for her "prince charming"
An expert shooter gives up her dreams to get back her family's pride.
A lawyer shunned by her own nd society.
A teacher battling misogyny.
A topper struggling with patriarchy.#SinfeAahan 👸❤ pic.twitter.com/NJt03IVSiK

people posting deep analysis about #sinfeaahan talking about women empowerment and everything.

me after watching sinfe aahan: OMG SYRA IS SO PRETTYY. SHE DOESN'T AGE AT ALL. I LOVE TO SEE HER BACK ON SCREEN. BLAH BLAH BLAH.😭 pic.twitter.com/b84elhnrwH

People were living for the production:

ISPR tirelessly serving and saving the nation- one TV production at a time!#SinfeAahan pic.twitter.com/zCVoNatzDR

Be their own heroes!

It warrants the confidence and exposure women need to be the main lead of their stories and not play a side character in their own life.
#SinfeAahan pic.twitter.com/279QIzZGz5

What did you think of the first episode?1 Let us know in the comments below!