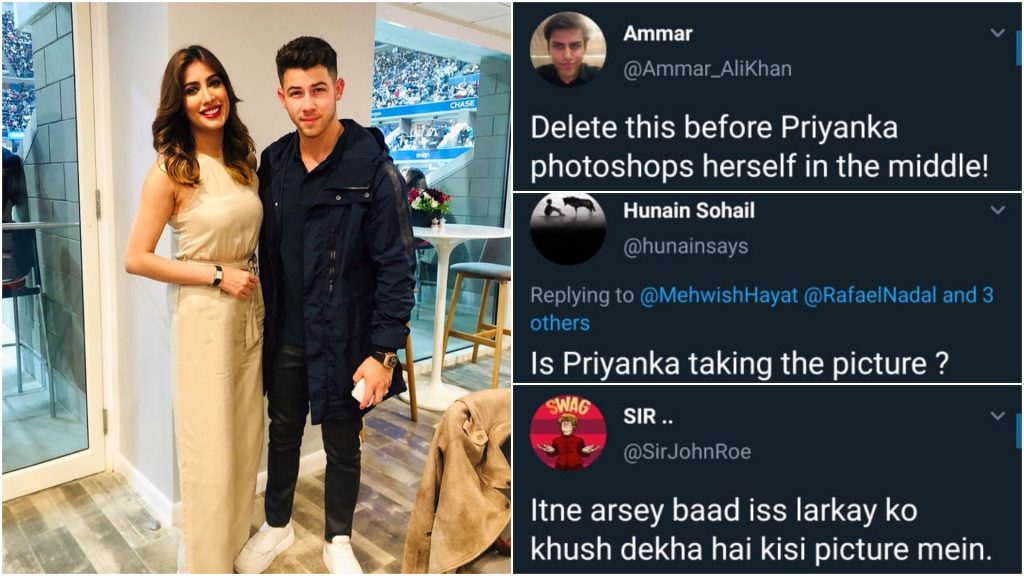 Our favorite diva Mehwish Hayat has been living her best life, fighting for what’s right, achieving new highs and enjoying herself too while she’s at it. Mehwish recently ran into Nick Jonas at the US Open Men’s Semi Finals in New York. She posted a picture alongside Nick Jonas and shared how the two were rooting for Rafael Nadal:

Guess who I ran into at the US Open Men's Semi Finals in New York! One thing we both agreed on was that we were both rooting for @rafaelnadal !🎾✌🏻@nickjonas @usopen @emirates pic.twitter.com/9rmRb62K12

That look when you think you've chosen the wrong wife.

Some wanted to know if Priyanka was the one taking the picture 😂:

Is Priyanka taking the picture ?

Some wanted it to be deleted before Priyanka could photoshop herself into the picture:

Delete this before Priyanka photoshops herself in the middle! https://t.co/OhgPqW65xv

He must be thinking he married in the wrong country

Some wanted to know if Priyanka was done venting:

Ask him is Priyanka done venting 😂

Many warned Priyanka to keep an eye:

You guys look great together @priyankachopra keep an eye

Some predicted what was to come:

And when he got home, Priyanka vented to him “are you done embarrassing yourself” and he said “we’re all here for love”….

Lol.. okay this is so ironic at this point in time. Bachay teri shamat hae ghar pe aaj tau.
Mehwish, you look gorgeous.

Some had sharp observations:

Many thought he looked happier with Mehwish rather than Priyanka:

He looks happy with u more than priyanka.

He looks very happy… (Regretting, why I could not meet her first) 🤣 pic.twitter.com/HNfOjpNvAw

I guess we’ll find out soon:

Was that venting lady and his embarrassment also accompanying him?

Some thought he looked like a kid with every woman:

Who is this little kid? Kis ka bacha hai?

Many replied with PC gifs…

He may be having second thoughts now,

I think he knows…

You should've told him about how racist Priyanka is. 😂😂😂

Ujaar do Priyanka ka ghr I'm with u 😂

SOMEONE IS GOING TO VENT SOON

And then of course, there had to be moral police:

Some shared how, when they run into people, its never Nick:

#richpeopleproblems
I ran into a police wala, and he gave me a challan

What do you think about the replies? Aren’t they hilarious? Let us know in the comments below!

4 dramas we can’t wait to watch!