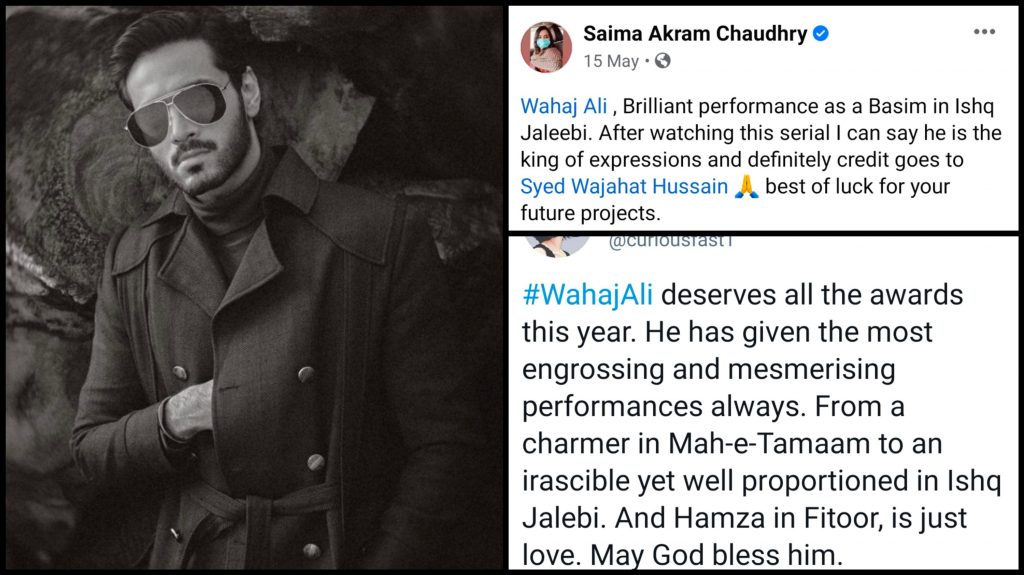 Of all the actors in the industry right now, Wahaj Ali has been consistently winning the hearts of his fans as he sets the bar higher and higher with every new project that comes his way. Currently having worked in Ishq Jalebi, Dil Na Umeed Toh Nahi and Fitoor, fans have been enjoying the various characters that he’s portrayed to absolute perfection.

Despite being a Ramzan special drama, fans are majorly missing Ishq Jalebi and the magic that Wahaj weaved into Basim:

My timeline is full of Basim tweets and I'm loving it. He is finally getting the attention he deserved.😭❤#WahajAli #IshqJalebi

#IshqJalebi Shout out to @iamwahajali brilliant performance as Basim! Basim was written so well – these days such nuances are sorely lacking in heroes. He had flaws and he owned it. A very relatable and natural performance!! Great job by writer and director also👍👍

He’s currently taking fans on a rollercoaster of emotions as he plays Jamshed in Dil Na Umeed Toh Nahi:

The meeting of Jamshed and Rakhi was so emotional and the way #WahajAli reacted was so intense, never seen such level of performance from him, the best, every expression was on the spot #DilNaUmeedTohNahi

This scene is all my heart ❤️
It made me emotional as i never impressed so,
It made me eyes wet
It made me hit mentally and emotionally 😟#DilNaUmeedToNahi #DilNaUmeedTohNahi #DNUTN #WahajAli #YumnaZaidi pic.twitter.com/f9f9Nl2q22

Wahaj just blew it away, such a tremendous performance.. words are not enough 👏🏻🤧😭♥️
Hats off literally 🤧#DilNaUmeedTohNahi#WahajAli pic.twitter.com/LmY9b52eQr

Needless to say fans mourned Hamza’s absence in Fitoor and with a return so intense, fans are thoroughly amused!

Shades of Hamza in just 1 episode🔥

Hii 🤤 Finally!!
Welcome back Hamza !!
You are nailing your every role like pro!!!
Hamza this psycho ashiq i am just loving it 😍😍
starting to watch #fitoor again only for #WahajAli … pic.twitter.com/Tlv9lsV8IF

My boy don't deserves this😭 They broked him completely💔#WahajAli #Fitoor pic.twitter.com/kHF1bcVmWe

Not only are his current performances a hit, he’s been proving his mettle from time and time again, be it Ehd-e-Wafa, Mah-e-Tamaam or Ghisi Pitti Mohabbat, he’s quite the charmer!

So I am currently watching #Fitoor and #IshqJalebi and man #wahajali has nailed it by playing the characters of #Hamza and #Basim. He is a gem for sure. 😍😍

#WahajAli deserves all the awards this year. He has given the most engrossing and mesmerising performances always. From a charmer in Mah-e-Tamaam to an irascible yet well proportioned in Ishq Jalebi. And Hamza in Fitoor, is just love. May God bless him.
LOVE YOU❤️ @iamwahajali pic.twitter.com/Xp63WuIUrO

From innocent Shariq to savage Basim and than from lover boy Hamza to the powerful performance of Jimmy all by the talented @iamwahajali
No words for his excellence. He is just perfect in every way.❤#WahajAli #EhdEWafa #IshqJalebi #Fitoor #DNUTN #WahajFan pic.twitter.com/NfqeFqzVUy

Do you agree that Wahaj Ali is the next big thing in the industry? Let us know in the comments below!

Netizens Are Adding The Funniest Situations To This Still From Dastaan!