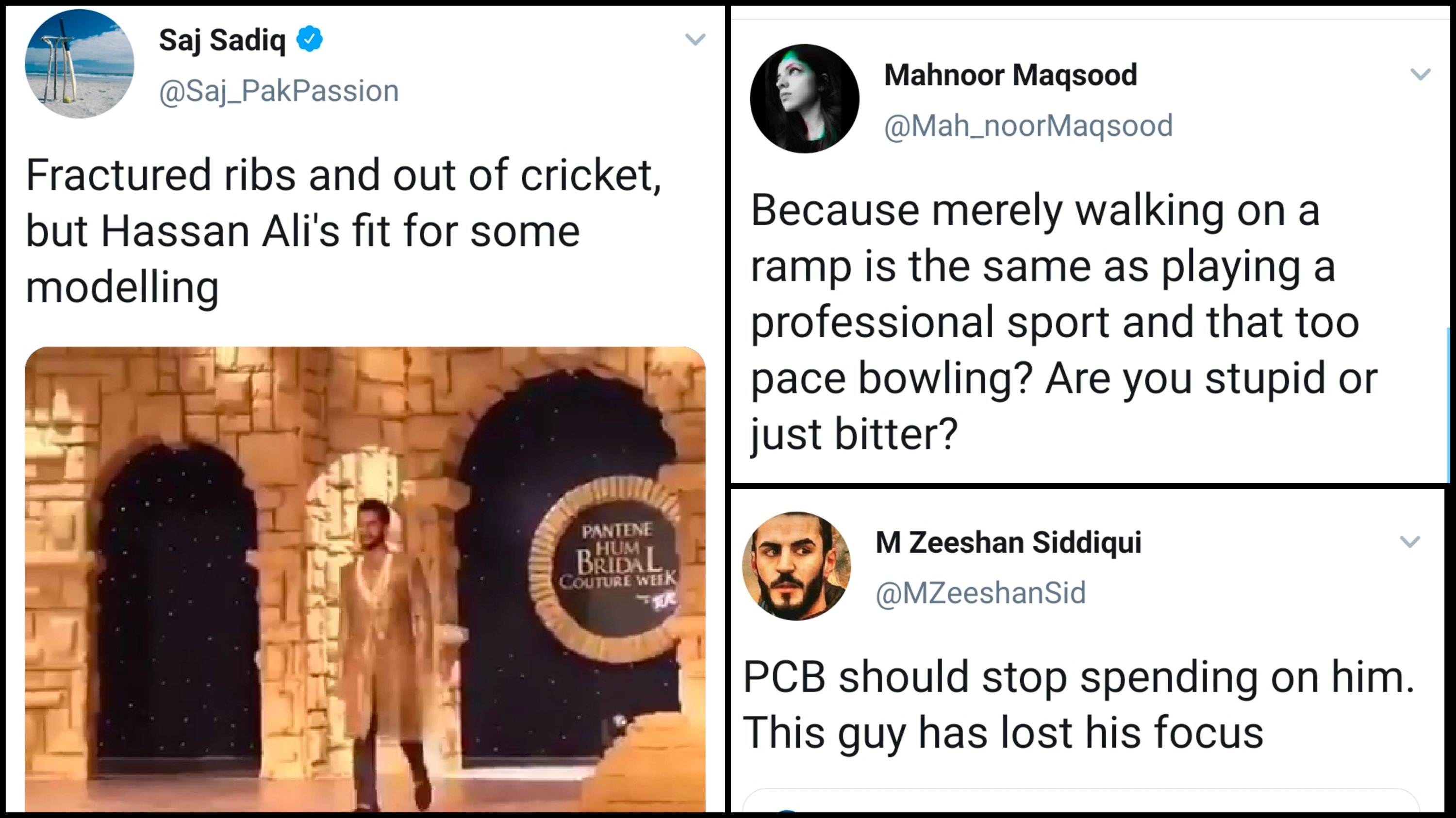 Cricketer Hassan Ali invited criticism towards himself after walking the ramp in a fashion show where he pulled off his famous celebratory move, after being ruled out of the two-Test home series against Sri Lanka.

Fractured ribs and out of cricket, but Hassan Ali's fit for some modelling pic.twitter.com/qTx0BXyed2

And while he was pulled out of the current squad due to coritcal rub fractures, the internet was surprised to see him!

This guy @RealHa55an disappointed a lot. Its seems he's more interested in out of the ground activities. His performance was dismal after CT17, he has to be serious and give performance to be in team

Some thought it was all about money:

Making more money than playing for Pakistan and alot more happy I would guess!

He got Beautiful house, car, wife & fame.
What else he wants now?
Gone those days when players play for country's prestige and for self actualization. https://t.co/ywltZxHQFx

Some were telling him to go to Bollywood:

Such a shame! He should better join bollywood!
A player with zero class #HassanAli https://t.co/XzvnUuoOb4

Some were questioning his priorities:

So, should we expect early cricket retirement from you ??? https://t.co/qErR0RR51I

Some thought he had lost his focus:

PCB should stop spending on him.
This guy has lost his focus https://t.co/qygL8iaquP

People thought the fame had gotten to his head:

Some can't handle the fame,money…@RealHa55an is gonna end up his career with his pathetic attitude towards cricket https://t.co/jMJJtgneZo

And while most were busy cursing him, there were a ton of people who came forward to defend him:

Because merely walking on a ramp is the same as playing a professional sport and that too pace bowling? Are you stupid or just bitter? https://t.co/4UpJerwbDP

Because bowling at 140 clicks is the same as walking down the ramp. Stupid analogy! Expect better from sports journalists. Reminds me of how everyone lost their minds when Shoaib Akhtar has a knee injury but still went to a night club back in 2005. https://t.co/df3hBiNbNc

Some commented on how handsome he looked:

But sir, he is really looking very smart and dashing

Some were criticising the haters:

"WHY IS THIS SPORTS PERSON HAPPY AND DOING SOMETHING THAT IS NOT SPORTS????"
-Ancient Pakistani Proverb https://t.co/lqVnnIBwzs

There were personal attacks too:

Oh my gosh. Get over it people. It's a fractured rib, he shouldn't have to stop living. https://t.co/qNSb8gl74u

Some resorted to sarcasm:

Oh no. A player who can't go through extensive physical exertion, is..walking? So obviously he faked his fractured ribs and the PCB medical team have no way to confirm it https://t.co/WqhNxkD89z

Yeah, because modelling must really put strain on his body 🤦🏽‍♂️

What do you think about Hassan Ali’s ramp walk? Let us know in the comments below!

After Shehwar, Mehwish gets a tight slap and people are calling it the slap of the year!

Diva Jukebox: 10 OSTs from 2019 That Had Everyone Hooked!