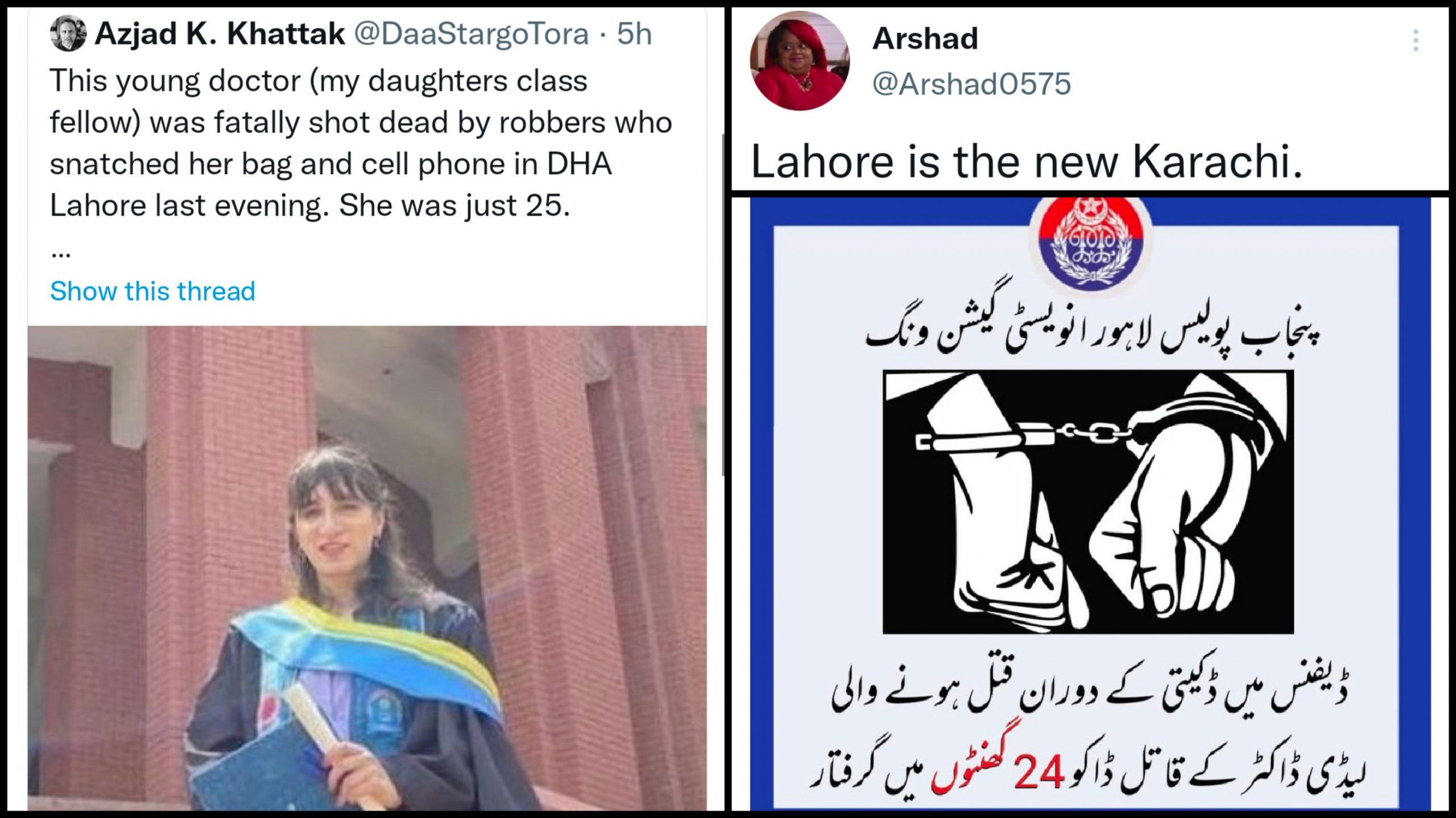 In an unfortunate series of events, a young doctor was shot dead during a robbery when she resisted in DHA, Lahore. The news came as a shock to many since street crimes are not as prevalent in Lahore.

This young doctor (my daughters class fellow) was fatally shot dead by robbers who snatched her bag and cell phone in DHA Lahore last evening. She was just 25.

Police is investigating the matter but we all know what will happen to the case. They might arrest them, take them to pic.twitter.com/wBR5qsJtal

And while the robbers have been arrested by the police, people are wondering if justice will be served:

Even people who didn’t know her that well were shocked:

She was my batchmate in a levels. We werent close at alll. But her death has affected me so much. I cant function. She was so full of life. This is so unfair. https://t.co/VkMtpi1NYv

May Allah bless Dr Khoula with the highest of ranks in heaven, ameen sum ameen. indeed losing young talented individuals like her is a big loss. May the robbers who became the cause of her death, get punished by the law and hereafter ameen. May Dr Khoula rest in peace in heavens https://t.co/XCLMO6Uu2k

People were worried about the growing street crime in Lahore:

Another day another incident and yet again one no would be held accountable for this. If anyone was to write a book on the current administration's last three years performance it would be titled as "Meine Lahore Ko Ujartay Dekha Hai". https://t.co/TFVesiQrv7

Some were calling Lahore the new Karachi:

Extremely painful. Just last night I read about this..shivers went down my spine. How unfortunate is this.Till when we'll keep listening that police is investigating the matter?It's a matter of a day or two& we'll forget..@InamGhani @OfficialDPRPP @UsmanAKBuzdar @MashwaniAzhar https://t.co/QrIDU919h2

Nothing will be done. No punishment will be seen. Police will be wandering without arresting them and after some days this case will disappear and people will forget what was the incident.
This is the sad reality in our country Pakistan. https://t.co/pUqyDx5BJe

People have had enough:

People were in shock!

Inna lilahe wainna ileihi rajioon.
Very shocking news indeed. May Allah give patience to your family and give the cool, chill and yo environment in Jannat just like your nature♥️
Just picturing her smiling face.. The nicest and harmless person ever.
Khola you will be missed🥺😢

People were sympathising with the parents:

People had no faith in the judicial system:

I have been saying this for 2 decades now;
The only thing i am hopeless about in this life; is Our Judiciary.

Sad news. Because of complete lack of justice, judges scared of their video leaks, one cannot expect anything from this system until major reforms.

People couldn’t help but think of her parents:

Got to know about this tragedy yesterday. It was around 3 pm in Z block. Cannot imagine what her parents must be going through.

Extremely painful. Just last night I read about this..shivers went down my spine. How unfortunate is this.Till when we'll keep listening that police is investigating the matter?It's a matter of a day or two& we'll forget..@InamGhani @OfficialDPRPP @UsmanAKBuzdar @MashwaniAzhar

People were so done!

Our criminal justice system is terribly broken. Criminals do not think twice about serious repercussions because they know they will be able to get away with it.

The cost of committing crimes is not high for the criminal. This needs to

The solution we had to some of these problems was the fading izzat culture. People knew their entire family will suffer for generations if they behave badly. Protecting izzat meant raising your kids to be strict conformists. Sons who become criminals would cost

3. Their family. People wouldn’t marry in such a family. The community wouldn’t share its resources with that family. these harsh and strict ways would make crime costly enough for people that they’d refrain from it for the most part. Now this culture is fading and our state

4. Institutions aren’t evolving fast enough to continue to keep the cost of crime high for criminals. It’s a terrible all around situation

She was my nieces friend. A lovely person, ful of life, brilliant at her studies & a kind hearted gentle soul. A tragedy beyond belief. May she rest in peace.

As far as her perpetrators are concerned, May they rot in hell

Some tried turning it into city wars:

Karachite are so desensitized, idhr hur din koi 3,4 ppl lose their life. Either do to robbery or a target killing. But no one cares. Meanwhile in Lahore one person died and there is outrage ( as it should be) I just wish there was also outrage when ppl died in Karachi.

Do you think justice will be served? Let us know in the comments below!